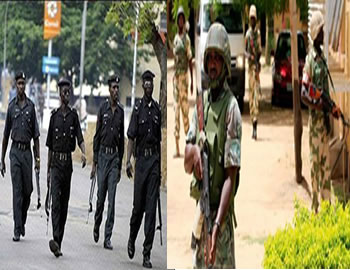 Pandemonium broke out on Wednesday night at Obelawo area of Osogbo, Osun state capital when three armed soldiers went berserk after the invasion of a police post in an attempt to secure the release of one of their detained colleagues.

The development which made some police officers on duty ran for their lives, caused apprehension in the vicinity as soldiers shot sporadically into the air apparently to scare the policemen and other inhabitants of the area.

The drama which lasted for about thirty minutes according to an eyewitness account, caused a traffic jam as both vehicular and human movements were halted while police on duty also said to have shot into the air.

It was learnt that the soldiers who were armed with knives, horsewhips, and other dangerous weapons, instructed police officers on duty to cooperate with them or face the music.

Investigations however revealed that trouble started around 6:50 pm when the soldiers invaded the police post with intention of freeing a cultist said to be in police custody because of his relationship with one of the soldiers.

Informed sources hinted that one of the soldiers who was related to the cultist had earlier on Tuesday afternoon approached the police post to secure the release of the detained cultist but his action met a brick wall as police on duty instead of releasing the cultist, also got the soldier detained.

When the news of their detained colleagues got to them, the rest said to have invaded the police post and in the process, there was a shootout between them and the police making many policemen run away.

After overpowered by the police, they said to have freed their colleagues and the cultist.

When contacted for comment, Osun Police spokesman, SP Yemisi Opalola, confirmed the incident and explained that the suspects claimed to have come from Ede barracks.

According to her, “Suspects who claimed they are military men from Ede took the suspected cultist away to Ede Military Barrack.”

In spite of the huge investment in the water sector by the government and international organisations, water scarcity has grown to become a perennial nightmare for residents of Abeokuta, the Ogun State capital. This report x-rays the lives and experiences of residents in getting clean, potable and affordable water amidst the surge of COVID-19 cases in the state…Shoot out as military  Shoot out as military

The Lagos-Ibadan railway was inaugurated recently for a full paid operation by the Nigerian Railway Corporation after about a year of free test-run. Our reporter joined the train to and fro Lagos from Ibadan and tells his experience in this report…Shoot out as military  Shoot out as military