‘She bathed our househelp with hot water for allegelly sleeping with me; her lover confessed to dating her’

•I saw packs of condoms in his pockets; used condoms in our room —Wife 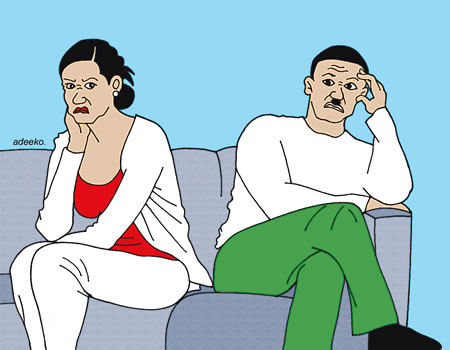 A mother of two, Mrs Isioma Eze, has lost her six-year-old marriage to adultery as an Igando Customary Court in Lagos, Lagos State granted the request of her estranged husband, Chigozie, to dissolve the union.

The court president, Mr Adeniyi Koledoye said that since the petitioner insisted on divorce after several interventions, the court is left with no option other than to grant him his wish and pronounced the union dissolved.

“The court hereby pronounces the marriage between Mr Chigozie Eze and Mrs Isioma Eze dissolved today; both of you henceforth cease to be husband and wife.

“Each of you should go on his or her separate ways unmolested, the court wishes both of you well in your future endeavor.

“The custody of the two children is awarded to Isioma while Chigozie must be paying N10,000 monthly for the children’s feeding and must also be responsible for their education and general welfare.”

Koledoye ordered the petitioner to pay a severance of N50,000 to his wife in order for her to move on with her life.

According to the News Agency of Nigeria (NAN), 41-year-old businessman, Eze, has approached the court on March 8, seeking to end his marriage on grounds that his wife was jealous and adulterous.

“My wife always checked my phone to know the people I called. If she sees a strange number and later discovers the caller is a female, she will fight and accuse me of dating the person.

“She bathed our house help with hot water after accusing her of sleeping with me. We were both arrested. I spent one month in Kirikiri prison and my wife spent six months.

“After she was released from prison, I told her to go and stay with her parents that I cannot afford money to rent another accommodation as I have spent all my money in the case.

“She refused to go but rather abandoned the children in my brother’s house and entered into a relationship with another man who rented an accommodation for her.

“When I confronted the man, he claimed that he was having an affair with my wife after she told him that she was no longer married to me.

He prayed the court to terminate their marriage saying he was no longer interested in it.

Rebutting the allegations, the 30-year-old businesswoman, Isioma, accused her husband of infidelity.

“We don’t use condom but I used to see used condoms in our bedroom and waste basket. I have found packs of condom several times while washing Chigoze’s trousers.

“There was a night I woke up around 1:00 a.m. and I could not find Chigoze on the bed.  I decided to search for him around the house but later saw him coming out from the room of a lady who is a prostitute.”

The respondent said that her husband was also having affairs with her friend’s younger sister whom she accommodated because she had accommodation problem.

“That night, I pretended I was fast asleep, he sneaked into the girl’s room, I followed him secretly, he told the girl to remove her clothes so that they can quickly have sex.

“When he saw me at the door, he started begging me; the girl confessed to me that she was sleeping with my husband because he promised to buy her a smart phone.

“I mistakenly poured hot water on her body which landed my husband and I in prison.”

The mother of two children said that she went into another relationship when her husband told her that it was over between them.

“When I was eventually released from prison, my husband told me that he was no longer interested in marrying me that I should go back to my parents’ house”.

I buy meat, ingredients, but my wife still refuses to cook; fixes dates with her lovers in my presence —Husband

‘My husband is a womaniser; infected me with gonorrhea twice, please separate us’