‘My husband is a womaniser; infected me with gonorrhea twice, please separate us’

•My parents have warned me never to divorce my wife —Husband 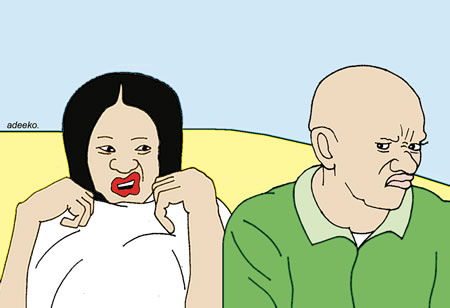 Kafayat had sought the court’s action to end their eleven-year-old marriage and award her custody of their three children.

The plaintiff in her divorce suit indicted her husband of making her life miserable. She stated that he was troublesome, had no respect for her mother adding that he ran after anything in skirt.

Taiwo did not consent to divorce when the claim was read to him.

“My lord, I’m fed up with my husband. Taiwo does not treat me well.

“I have moved out of his house twice to my parents’ but they drove me back to him admonishing me to endure his misbehaviour. My lord, I can’t tolerate him any longer, “Kafayat stated before the court.

“Taiwo has no human feeling. My father was killed by armed robbers while carrying out his duty and my family was thrown into mourning. My husband showed no concern and was indifferent to our plight during the time of our grief.

“Few months later, my sister was involved in a motor accident which almost claimed her life. She was on admission at the University College Hospital (UCH), for months.

“My lord, Taiwo again showed no pity. Any time he claimed he came to check on my sister, he would be found chatting, playing or debating with people around. He would be in high spirit as if he had won a lottery which I found embarrassing.

“My parents and I resorted to taking a loan to meet up with the medical expenses of my sister after we had expended all we had on her.

“My mother and I and three other people who were our neighbours came together to obtain a loan from a micro finance bank and my husband stood as our guarantor, “the plaintiff said.

“He started making life difficult for me after this and would refuse to give me feeding allowance on many occasions. He won’t give me money unless one of the neighbours who joined us in securing the loan appealed to him.

“My lord, I later discovered he was dating this neighbour of ours.

“I returned home from work earlier than usual and caught the two of them right in our bedroom. I accused him of betraying the trust I had in him and he beat me till I almost fainted.

“My husband got worse by the day. He’s morally bankrupt and runs after everything in skirt.  He has been infected with gonorrhea twice as a result of his loose lifestyle.

“Taiwo has no regard for my parents especially my mother. He addresses her rudely and insults her even in my presence.

“He further went to pour acid water on my mum when she challenged him.

“I reported him at the police station and he was invited. They found him guilty after interrogating him and would have locked him up but for my plea.

“Since then, any time my path and that of Taiwo crosses, he would beat me and tear my clothes into shreds.  He has torn my clothes thrice.

“My lord, I’ve had enough of my husband’s shameful behaviour. I pray that you separate us and grant me custody of our three children, “Kafayat said.

“My lord, I don’t agree to divorce because my parents have warned me never to divorce my wife or marry two wives, “Taiwo told the court.

“My lord, the relationship between Kafayat and I went sour when I lost my job and was living on my sister.

“She left me and moved to her parents’ house, but her father later called for reconciliation between us. I had already got a new job by this time.

“I rented a new apartment but she refused to move in with me on the excuse that she didn’t like the place. She decided to look for a place of her choice and asked me to pay the rent which I did.

“I moved in with her but I regretted that I did.

“Kafayat disrespected me. She would receive male calls in my presence not caring that it was late.

“I once caught her coming out of our apartment with a strange man, “Taiwo stated.

“My lord, I struggle to make ends meet, but Kafayat never appreciated my efforts.

“I ply Ibadan-Abeokuta route every day to supply ice block. I leave home in the deep of the night in order to get to my customers very early in the morning. I’ve once been attacked by armed robbers who made away with my money. I escaped death by whiskers.

“I have set Kafayat up in different businesses but she ruined them.

“I stood as guarantor when she and others wanted to borrow money. The money was meant to be paid back within twelve months but they paid up to the eighth month. I was made to pay the balance.

“My lord, I’m a decent man and don’t get involved in extra marital affairs, “he concluded.

The court president, Chief Olasunkanmi Agbaje adjourned the case till Tuesday 28, and asked both parties to come with their children, parents or family members.

‘She bathed our househelp with hot water for allegelly sleeping with me; her lover confessed to dating her’