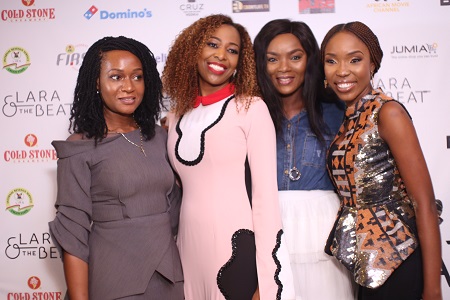 SEYI Shay and Vector are bringing the heat and the beat this summer and it all kicked off in Lagos with the official trailer release and press conference of ‘Lara and the Beat’ the movie, earlier today.

From the studio that brought you Banana Island Ghost (BIG) in 2017, Biola Alabi Media’s big movie of 2018 is shaping up for an even bigger movie premier and cinematic release with ‘Lara and the Beat’ this summer.

‘Lara and the Beat’ is about the young and beautiful Giwa sisters caught in the centre of a financial scandal with their parent’s media empire.

The sisters are forced out of their privileged bubble and must learn to build their own future and salvage their family’s past.

The movie also tells a love story between Lara and Sal (a.ka The Beat), who helps find her voice and jumpstart her musical journey.

‘Lara and the Beat’ is a movie about Loss, Love, Music…and a Dream.

According to Biola Alabi, Executive Producer and MD of Biola Alabi Media, “Lara and the Beat is a reinforcement of our promise and goal to continue to tell authentic African stories to local and global audiences.

We have worked with the best talents in the industry and engaged key partnerships and collaborations that have helped to deliver this outstanding movie.

I am happy we are unveiling this trailer today and I look forward to everyone enjoying ‘Lara and the Beat’ in the cinemas from July 20.”

Themes explored in the movie, as seen in the trailer, include financial literacy, family values, sisterhood, friendship, music, fashion, culture and love.

With ‘Lara and the Beat’ the movie, and all it has lined up leading up to the cinematic release on July 20, Biola Alabi Media has yet again raised the bar for the industry.

Lagos State Internal Revenue Service (LIRS), a major partner of the movie, believes that this handshake with the film industry is the best way to spread the vital message of civic duty and civic responsibilities.

“We have partnered with the movie, ‘Lara and the Beat’, because we identify so much with the movie industry’s power to tell our authentic stories, and indeed, Lagos State has an inspiring story to tell.

Lagos is at the centre of this film and with the way the state is showcased you can clearly see taxpayers’ money at work.

Through this partnership we want people to see why it is important to comply with civic responsibilities, as well as recognize how discomforting it can be when one fails to perform their civic duties,” said LIRS Chairman, Mr Ayodele Subair.