Property and EnvironmentReal Estate
By DAYO AYEYEMI On Nov 17, 2020 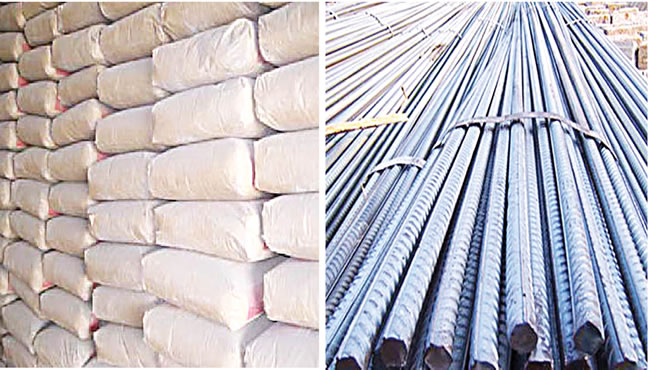 The rising cost of cement and reinforcement bar, popularly known as iron rod, is throwing up issues among housing stakeholders on the need to adopt alternative building materials in the sector. DAYO AYEYEMI reports.’

THE sudden increase in the price of   building materials, especially cement and reinforcement bar, is generating concerns  among home builders, property owners  and real estate developers in the  country.

Expressing worries over  high costs of cement and iron rod, some built environment professionals and developers said that it has become imperative for the adoption  of  alternative building materials in the industry.

They are of the opinion that if they could not eradicate the use of cement and iron rod totally, there should be  alternative   materials that would help reduce their quantities in building production process.

They recalled that a lot of research had been carried out by the Nigerian Building and Road Research Institute (NBRRI) and Nigerian universities in the past on alternative building materials.

Some of them, they mentioned included  local brick,  NBRRI’s Pozzolana (alternative cement), clay pots, woods and bamboo , among others.

Speaking with Nigerian Tribune, Managing Director,  Ace Hi-Tech Construction Company Limited, Adewunmi Okupe, said he had been advocating the use of alternative building materials to reduce cost of building  mass housing units for the past 30 years.

Although,  he said there was  no full alternative to cement, but that  some efficient materials have been developed in this area.

To reduce the overall usage of cement by developing alternative materials, he canvassed the use of stabilised laterite bricks, saying it could save builders  4 to 10 per cent  cement.

“This is a lot of savings in cement usage if the material is adopted for building walls,”

He also mentioned that the use of ribbed suspended floors would  help to  reduce the volume of concrete and cement used in suspended slab.

“There was a time that hollow clay pots were introduced to reduce concrete in suspended floors too. All these efforts should be followed up,” he said.

According to him, wood and bamboo were  tensile materials just like steel were  ready alternatives to iron rods in a number of cases, adding  that architects and engineers could integrate them in approoriate sections of their designs to start with.

Okupe explained  that NBRRI had developed these materials over the years but  are yet to be  commercialised.

“I dont think the materials have been commercialised.  The same goes for the university, and housing professionals,” he said.

The managing director called for concerted efforts among built environment professionals, saying they should come together to present alternatives developed for every conventional building element.

In addition, he said they should build a prototype  house completely with alternative materials.

Okupe also advocated the use of integrated wood flooring for suspended slabs in residences, noting that with fayo home builders  could achieve over 75 per cent  reduction in the use of concrete. “Only wire mesh will be needed to reduce steel reinforcement completely,” he said.

Dean of Faculty of Environment Science, University of Lagos, Professor Olumide Adenuga, said  the Department of Building  had work on replacement of reinforcement bar  through the usage of clay pots.

According to him, idea of alternative building materials had been talked about for a very long time but  that no serious effort was made to popularise these materials or their usage.

Omeife said : “Yes, there is abundance of alternative materials that can be used  as a substitute, the question is the availability of such in quantities that can be deployed and that people are aware of.”

He called for a deliberate policy by government to sway the mind of  people to embrace alternative materials as well as creating confidence for them by their specifications for usage in government’s projects nationwide.

Omeife said there was adequate alternative substitute for most of the major building materials like cement, reinforcement and many others,pointing out that  the challenge was that they have not been fine-tuned or  prepared ready for use.

According to him, NBBRI and other research  institutions have done adequate theoretical work in this respect, adding that what needed to be done was to encourage the institutions to standardize and finalize their process of production and usage.

“Like some will tell you that they are only research institutions and their mandate do not include mass production of these alternative materials. This aspect is left for interested investors who can partner with this institutions to mass produce these materials and put them to use,” Omeife said.

Besides, he said that investors are also wary of government’s policy summersault,  which, according to him,  could negatively impact any investment.

He said : “These are the issues government must look into and tidy up to encourage investors to patronize the use and production of alternative materials by collaboration with  research institutions.

“It is only through government’s intervention that we can be confident in the use of alternative building materials.”

On why  the product has not been commercialized for use, the professor said it was  too early to blame companies and developers for not buying into it.

According to him, there was need for awareness campaign “which is moving quite slowly.”

He said : “A research team has worked on application to produce concrete and specimens are displayed in the DG’s office in Ota. The production manager, has been  empowered and expected to produce and stack up to 2,000 bags of  pozzolana in the plant.

“I am aware there are bags but not near the number targeted.”

“Concerning advantages, the main one is cost reduction but also to note that Pozzolans are essentially “Waste to Wealth” products and therefore perfectly green materials that assist to create jobs and wealth while helping attain sustainable environment,” he said.

On its sustainability, he said the raw materials “are literally inexhaustible ranging from clays of specific grades to volacanic ash to agro wastes like rice husk ash, maize cobs, bagasse, and other wastes like saw dust ash and fly ash.

He pointed out that pozzolana has no detrimental side effect “but is slow hydration that implies the concrete takes longer to harden typically two times to four times that of cement with superior advantages in terms of low heat emission thus almost crack free and being good sealant with high degree of imperviousness.”

He said : “ It is important to stress that Pozzolana is neither new in the world nor in Nigeria. We have been researching Pozzolana for more than two decades in Nigeria but even material for research is always difficult to get and crude processing techniques used by research students.

In other climes, Pozzolana is well known and patronised.