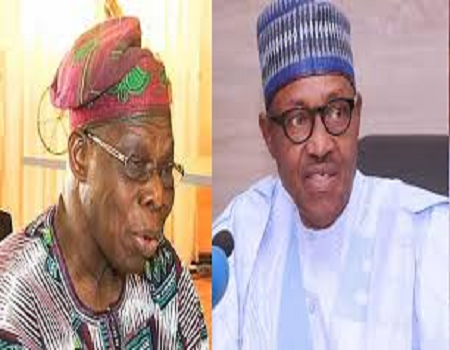 Obasanjo made the call in an open letter written to President Muhammadu Buhari on Monday, a copy of which was made available to the News Agency of Nigeria (NAN) in Abeokuta.

He expressed concern over the security challenges posed by the Boko Haram terrorists and the herdsmen/farmers clashes in some parts of the country.

Obasanjo opined that there should be a balancing approach in handling the Boko Haram issue.

He said: “Boko Haram will not go away on the basis of sticks alone, carrots must outweigh sticks.

ALSO READ: We are determined to rid Nigeria of insurgency, criminality ―Buhari

“How else do you deal with issues such as only about 50 percent literacy in North-East with over 70 percent unemployment?”

The former president also stressed the need to create a platform where possible grievances of the Fulanis and other ethnic groups in the nation could be addressed.

Obasanjo noted that well-meaning Nigerians have continued to proffer different solutions at addressing the challenges adding that “all the calls and cries can only continue to be ignored at the expense of Nigerian unity, if not its continued existence”.

He also stressed the need for strong support and cooperation from Nigerians to ensure effective implementation of desired initiatives,

“Like on the issue of security, the government should open up discussion, debate, and dialogue as part of consultations at different levels.

“The outcome of such deliberations should be collated to form inputs into a national conference to come up with the solution that will effectively deal with the issues and lead to rapid development, growth, and progress.

ALSO READ: We are determined to rid Nigeria of insurgency, criminality ―Buhari

“Such development will give us a wholesome society and enhanced living standard and livelihood in an inclusive and shared society.

” It will be a national programme. We need unity of purpose and nationally accepted strategic roadmap that will not change with whims and caprices of any government.

” It must be owned by the citizens, people’s policy and strategy implemented by the government no matter it is colour and leaning,” he said.

Groups suggested by Obasanjo for participation in the national debate are traditional rulers, past heads of service, past heads of para-military organizations, private sector operators as well as civil society groups and community leaders