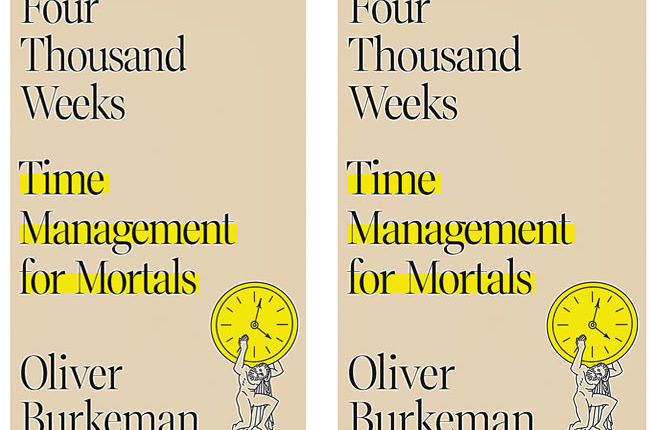 You’ve probably already worked out what this book’s title means, even if the number seems outrageously small. Four thousand weeks is roughly the amount of time you’ll get through if you live to be 80. That will appear even more paltry as you age – not just because you’re running out of weeks, but because time speeds up in your head the older you get, until the weeks seem to flash by in minutes.

But Oliver Burkeman is not here to scare you into squeezing every last drop of pleasure and productivity from your meagre ration of weeks. His previous book, The Antidote, was subtitled “happiness for people who can’t stand positive thinking”. He is the self-help writer for people like me who find self-help books oversold on magical transformations. Here, true to form, he tells us to abandon the impossible – “the quest to become the optimized, infinitely capable, emotionally invincible, fully independent person you’re officially supposed to be”. Four Thousand Weeks is a time-unmanagement book, a pushback against what the American writer Marilynne Robinson calls the “joyless urgency” of our age.

Burkeman argues that contemporary life makes us think of time instrumentally, not as something we live in but as something to be got through efficiently on the way to somewhere else. Our minds thus live permanently in an imagined near future. Apps get rid of consumer “pain points”, allowing us to hail cabs or order pizzas just by swiping and prodding our phones. Whole business models are built on the number of seconds a web user will wait for a slow-loading page. If Amazon’s homepage loaded a second slower, Burkeman points out, it would lose $1.6bn in annual revenue. And how alert of him to notice that the office microwave usually has a few seconds on the clock left by its last user, “a precise record of the moment at which the impatience became too much for them to bear”.

We try to shave valuable seconds off our most tedious tasks to make more time for ourselves. But time is also what economists call a “network good”: it derives its value from how many other people can access it and synchronise their access with ours. To do countless important things with time – make friends, build relationships, raise children – you need your time to mesh with other people’s time. Using time well means having less control over it.

Burkeman diagnoses the modern condition as “existential overwhelm”. There are just far too many things that seem worth doing. He advises us to embrace “the joy of missing out”: the recognition that renouncing alternatives is what makes any choice meaningful. We should surrender to what Germans call Eigenzeit, the time integral to a process itself. If a thing’s worth doing, it takes as long as it takes.

Four Thousand Weeks is full of such sage and sane advice, delivered with dry wit and a benevolent tone. I didn’t wish back any of the time I spent reading it. But will it help me and other time micro-managers to be less neurotic? Up to a point. I wish I had the resolve not to reply too quickly to emails, as Burkeman recommends on the grounds that it only generates more traffic and often the impending crisis flagged up by the sender just goes away anyway. But I am weak and the avalanche of emails is strong. How I long for the insouciance of the person whose tweet once appeared in my timeline: “Calm down, I answered your email in my head.”

Our problem with time, Burkeman writes, is that we refuse to see that “this life, with all its flaws and inescapable vulnerabilities, its extreme brevity, and our limited influence over how it unfolds, is the only one we’ll get a shot at”. Well, yes: life’s not a rehearsal. And we need to live in the present and not mind so much about whether the future will conform to our desires for it. We know all this. Four Thousand Weeks never quite escapes the traditional bind of the self-help book, which is to say obviously sensible things that are hard to put into practice because of the human tendency to irrationality and self-sabotage.

Burkeman urges us to accept the “blunt but unexpectedly liberating truth: that what you do with your life doesn’t matter all that much”. On the great cosmic scale this is certainly true, but is it liberating? I am not so sure. As instinctively meaning-making animals, human beings need to feel that our lives matter. And it is precisely because we only have one life that we can’t stop fretting over whether we are filling our few thousand weeks with the right things. Our era certainly aggravates these anxieties, but I suspect we have long driven ourselves slowly mad like this and will continue to do so. You can’t blame today’s “joyless urgency” for that; it’s called being human.

3 leadership lessons to help you thrive in uncertainty

The Silo Effect: The Peril of Expertise and the Promise of Breaking Down Barriers

Review of Think and Grow Rich