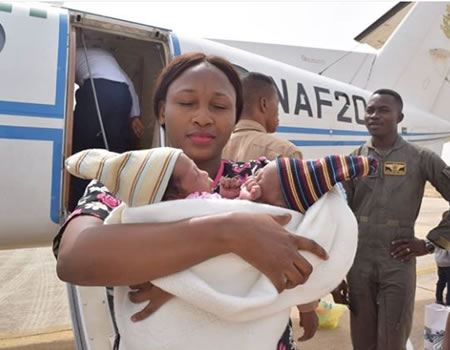 The Civil-Military relations of the Nigerian Air Force (NAF) airlifted a set of conjoined twins along with their parents and the medical team from Yenagoa to Yola.

The purpose is to have a successful separation of the abdomen joined twins who came to Yola via Port Harcourt by helicopter.

The twins, who are joined at the abdomen, are expected to undergo surgery at the Federal Medical Centre in Yola.

Doctors at the Federal Medical Centre, Yola, led by its Chief Medical Director, Prof. Auwal Abubakar, an acclaimed pediatric surgeon, and other doctors had successfully separated female omphalopagus twins (joined from mid-thorax to mid-abdomen) in May 2018