Entertainment
By Adam Mosadioluwa On Nov 23, 2022 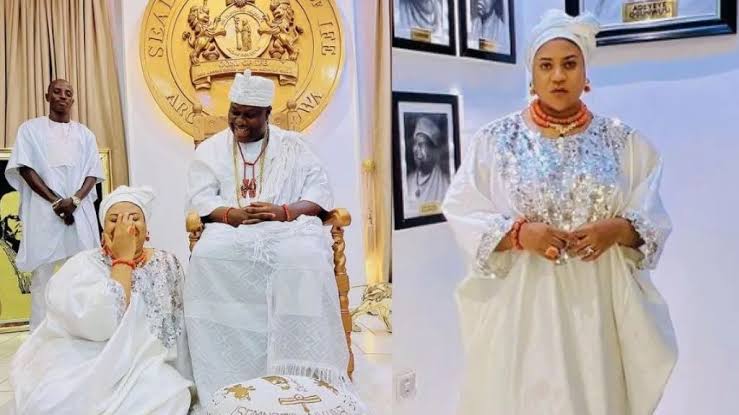 Reactions have continued to follow the recent visit of popular Nollywood actress, Nkechi Blessing, to the Ooni of Ife, His Royal Majesty, Oba Adeyeye Enitan Ogunwunsi, Ojaja II, in his palace at Ile-Ife, Osun State.

The visit is coming weeks after the controversial actress had taken to social media to make public her intention to be the next wife of the highly respected Yoruba monarch.

In an Instagram post dated October 29, 2022, the actress posted a photoshopped image of her kneeling before the monarch and captioned, “Ooni of Ife Sir, I am patiently waiting for my turn…thank you in advance, sir.”

While recounting the experience from her visit to the Ife Palace on her Instagram page, she described the king as a jovial king who made her laugh like never before in a long time.

Sharing a picture she took with the king at the Ife Palace, she wrote, “Ever met a jovial king? Well, this picture says it all. I have never laughed this hard in a long time. Thank you so much for the warm reception his Imperial Majesty Ooni of Ife, Oba Enitan Adeyeye Ogunwusi Ojaja II. God bless your existence.”

Some social media users have, however, taken to Twitter to react to the actress’s visit to the Ife Palace owing to her earlier disclosure of dreaming to be the latest queen of Ife Kingdom.

A Twitter user @theovamediaBA “Wow.. So Nkechi Blessing went to see Ooni of Ife! 🙂May her dream come true in Jesus name🤲”

Another user, @ BusayoOtebara wrote, “If Ooni of Ife marry Nkechi Blessing lasan, naa all the secret wey dem no tell us about our forefathers she go dey tell us.”

The actress has however given a reason behind her visit to the palace.

According to her, she was invited to the palace by Queen Aderonke Ademiluyi as one of the judges of a beauty pageant tagged “Queen Morémi Ajasoro Cultural Pageantry”

“It was an honour to be invited to the palace by her Royal majesty Olori Aderonke Ademiluyi Ogunwusi as one of the judges for @qmainternational,” Nkechi Blessing posted on Instagram.

‘Beer With Us Festival’ debuts in style