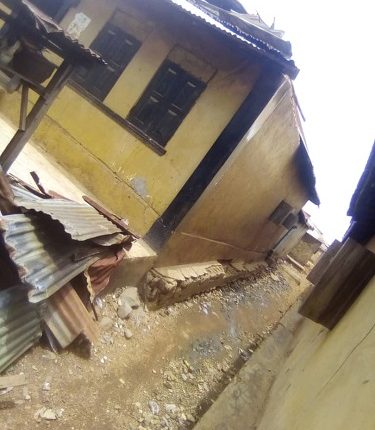 Property worth millions of Naira were destroyed by a rainstorm, on Monday night, in Okeagbe Akoko, in the Akoko North West Local Government Area of Ondo State.

The heavy storm which started around 8 pm in the evening was accompanied by the rainfall and caused havoc in the community, blowing off roofs of houses and other property, including shops, schools, churches and electric poles.

Properties destroyed by the flood included cars, mattresses, cooking utensils among other items.

A resident of the community, Alhaji Adamo Adetiba, lamented that the effect of the rainstorm was devastating, describing it as unfortunate while many residents of the community have been rendered homeless.

Adetiba called on the state and federal government for assistance in repairing the buildings destroyed by the storm, saying that most of the shops in the town had been closed, saying the effect of the rainstorm was devastating.

He disclosed that part of the town market was affected by the rain while the roof of some schools were totally destroyed.

Disturbed by the incident, residents of the two communities have called on the federal and state governments and other intervention agencies, particularly, the National Emergency Management Agency, (NEMA) to come to their assistance.

A community leader Chief Owolabi Abannikanda called on NEMA to assist the victims saying most of these victims could not afford to feed themselves.

Abanikanda, however, called on the people of the area to start planting trees to serve as a windbreaker during a rainstorm.

The British Parliament at the Westminster Hall held a debate on ‘e-petition 554150, relating to Nigeria and the sanctions regime’ on Monday. The government of the United Kingdom has however responded…Rain wreaks havoc