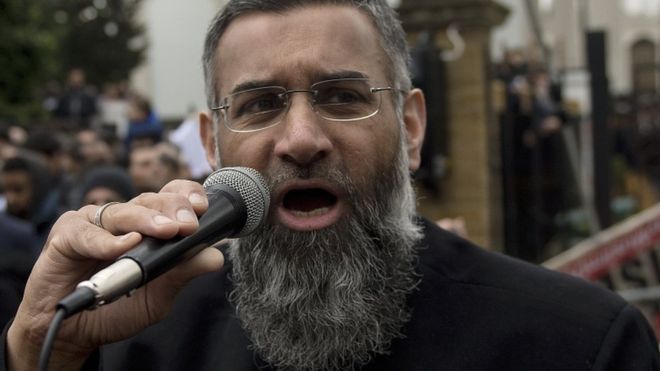 RADICAL United Kingdom cleric Anjem Choudary has been convicted of inviting others to support the so-called Islamic State group, it can now be reported.
Choudary, 49, drummed up support for the militant group in a series of talks posted on YouTube, the Old Bailey heard.
He was convicted alongside his confidant, Mohammed Mizanur Rahman.
The Met Police said many people tried for serious offences “attended lectures or speeches given by these men.”
BBC reported that counter-terrorism chiefs have spent almost 20 years trying to bring Choudary to trial, blaming him, and the proscribed organisations which he helped to run, for radicalising young men and women.
The verdict on the two defendants was delivered on 28 July, but for legal reasons can only now be reported.
The trial heard how the men decided in the summer of 2014 that the group then known as Isis [Islamic State in Iraq and al-Sham/the Levant] had formed a “Khilafah”, or Islamic State, that demanded the obedience and support of Muslims.
They then invited others to support IS through speeches and announced their own oath of allegiance to its leader.
The oath of allegiance was a “turning point” which meant they could be put on trial, police said.
Choudary was once the spokesman for al-Muhajiroun, an organisation that can be linked to dozens of terrorism suspects.
Its leader Omar Bakri Muhammad fled the United Kingdom after the London suicide bombings on July 7, 2005. Over the years since, Choudary has become one of the most influential radical Islamists in Europe and a string of his followers have either left the UK to fight in Syria or tried to do so.
The court heard that in one speech in March 2013 Choudary made it clear that he wanted the Muslim faith to “dominate the whole world”.
“Next time when your child is at school and the teacher says ‘What do you want when you grow up? What is your ambition?’, they should say ‘To dominate the whole world by Islam, including Britain – that is my ambition’,” he said.
Commander Dean Haydon, head of the Met Police’s counter-terrorism unit, said the case which led to the conviction of Choudary and Rahman was a “significant prosecution in our fight against terrorism”.
He said: “These men have stayed just within the law for many years, but there is no-one within the counter terrorism world that has any doubts of the influence that they have had, the hate they have spread and the people that they have encouraged to join terrorist organisations.
“Over and over again we have seen people on trial for the most serious offences who have attended lectures or speeches given by these men.
“The oath of allegiance was a turning point for the police – at last we had the evidence that they had stepped over the line and we could prove they supported ISIS.”
He said the trial had considered over 20 years’ worth of material over more than 333 electronic devices containing 12.1 terabytes of storage data.
Choudary and Rahman will be sentenced at the Old Bailey on 6 September.