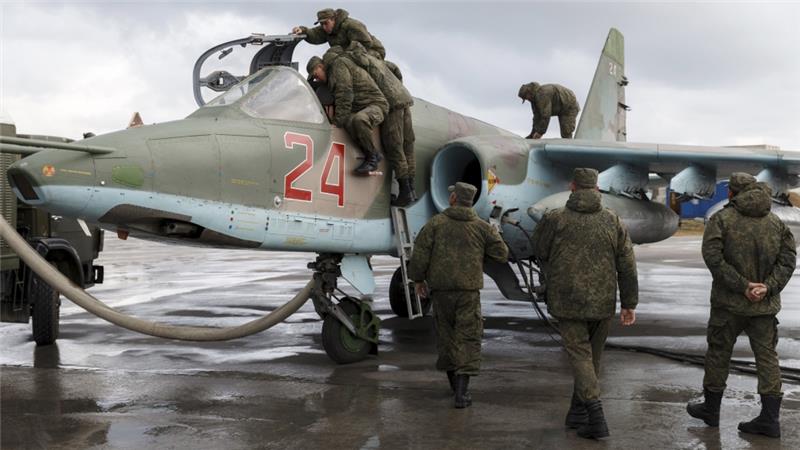 RUSSIAN jets based in Iran on Tuesday struck targets inside Syria, the Russian defence ministry said, after Moscow deployed aircraft to an Iranian air force base to widen its campaign in Syria.

The ministry said the strikes, by Tupolev-22M3 long-range bombers and Sukhoi-34 fighter bombers, were launched from the Hamadan airbase in western Iran.

It is thought to be the first time Russia has struck targets inside Syria from Iran since it launched a bombing campaign to support Syrian President Bashar al-Assad in September last year.

The move came amid reports in Russian media that Moscow has asked Iran and Iraq for permission to fire cruise missiles at Syrian targets across their territory from the Caspian Sea.

The ministry said Tuesday’s strikes had targeted the Islamic State of Iraq and the Levant (ISIL, also known as ISIS) and fighters affiliated with the group previously known as the al-Nusra Front in the Aleppo, Idlib and Deir el-Zor provinces.

Both groups have been designated as “terrorists” by the United Nations. Last month, al-Nusra Front changed its name to Jabhat Fateh al-Sham and said it had severed a relationship with al-Qaeda.

Russia’s state-backed Rossiya 24 channel earlier on Tuesday broadcast uncaptioned images of at least three bombers and a Russian military transport plane apparently inside Iran, but said it was unclear how many Russian bombers had arrived there.

It said the deployment would allow the Russian air force to cut flight times by 60 percent and increase bombing payloads.

Russian media said the Tupolev-22M3 bombers, which had already conducted many strikes on fighters in Syria from southern Russia, were too large to be accommodated at Russia’s airbase inside Syria.

The Tupolev-22M3 is “a fairly large, supersonic, long-range, strategic bomber. It needs a bigger air field than Russia already has in Syria. The previous sorties that this plane has been on have been flown from an airfield in southern Russia, but the problem with that is that it’s 2,000km away from the targets that its striking in Syria. This airfield in Iran is only 900km away,” Al Jazeera’s Rory Challands, reporting from Moscow, said.

“The advantage in reducing flight-time, costs, and what the Russians say is the effectiveness of the strikes, makes this a pretty clear tactical decision to make.”

It was also a “PR move”, said Challands, meant to reinforce the notion that “there is still enough of a strategic connection between Russia and Iran for them to work closely together in the field of war in Syria.”

The Iranian airbase near Hamadan, sometimes also called Hamedan, is located in north-west Iran and the Russian bombers would have to over fly Iraq to conduct strikes in Syria.

“It’s not just Russian planes touching down in Iran. To establish an operational base, they’d have to move hundreds of servicemen as well.

So, this is actually Russia establishing a rather sizeable military presence inside Iran,” he told Al Jazeera from Moscow.