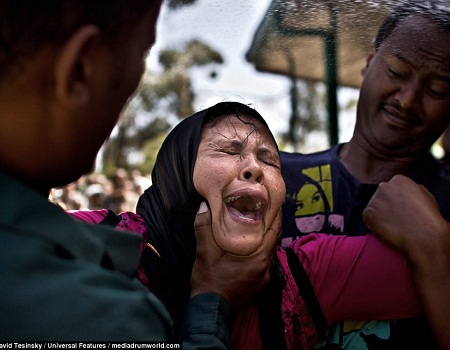 A mass exorcism ritual involving hundreds of Ethiopian Christians, who paid up to a month’s wages to be punched by a priest and doused in ‘holy water’, has been captured in a fascinating photo series.

Some 150 people had been queuing up at a church outside the Ethiopian capital Addis Ababa in order to meet a local celebrity healer whom they believe would be able to free them from ‘demons’.

The photos show people of all ages crying hysterically as a cross touches their forehead, or being held down by relatives as they try to avoid being ‘exorcised’, kicking and screaming.

Other striking shots show a woman seemingly screaming with all her might as she is brought up to the priest, grown men in tears, and dozens of people being hosed down with holy water.

ALSO READ: You can be a Christian and practice clean politics ―Convener, Believers in Politics

They were taken by Czech photographer David Tesinsky who had ventured to Ethiopia specifically to capture exorcism rituals.

After two weeks of trying to convince locals to let in photograph the religious events, he found the Yerer Selassie church, not far from Addis Ababa, where locals were lining up to meet Ethiopian Orthodox priest Memehir Girma Wedimu.

‘People were crying, screaming and Memehir was punching them,’ said Tesinsky. ‘Memehir, I learned, had rejected all other churches, because he earned more money than the church itself.

‘These exorcism rituals are usually performed if someone is not responding to modern medicine or if they are misbehaving.

‘Their families think they are possessed by a “demon spirit” or “buda” – the power of the evil eye. They must be performed by a local priest.’

3 killed, many injured as stand collapses in Ethiopian ceremony