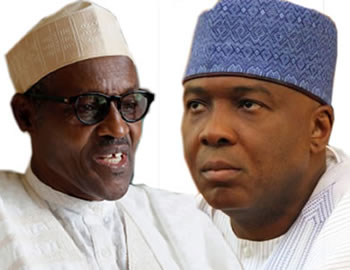 •Saraki, Ekweremadu, not Senate, on trial —SGF      •We are being assaulted —Senate

THE Federal Government has cautioned the Senate President, Senator Bukola Saraki and his Deputy, Senator Ike Ekweremadu, over uncomplimentary comments against President Muhammadu Buhari over the duo’s arraignment at a Federal High Court, on Monday.

Secretary to  the  Government  of the Federation (SGF), Mr Babachir Lawal, in a statement he personally signed and made available to newsmen on Wednesday, said the attacks on President Buhari  were misplaced.

He said the trial of the duo for alleged forgery of the Senate rules should not be taken that the entire Senate or legislative arm of government was on trial.

Lawal said: “Since the arraignment of the President of the Senate, Senator Bukola Saraki and his Deputy, Senator Ike Ekweremadu, before the Federal High Court on Monday, June 27, 2016, the two leaders of the Senate  have issued two separate press statements conveying messages that are far from being complimentary to the person and government of President Muhammadu Buhari.

“Senator Saraki, in his statement, clearly insinuated that Mr President is not in control of his administration and that a cabal now runs the federal administration.  On the part of Senator Ekweremadu, he insists that President Buhari is exhibiting dictatorial tendencies that can derail our democracy.

“From their statements, the two leaders of the Senate also gave this erroneous impression that, by their arraignment, it is the entire Senate, and, indeed, the legislative arm of government that is on trial.

“They want the public to believe that their prosecution is utter disregard by the executive arm of government for the constitutional provisions of separation of powers and that preferring the forgery case against them is a vendetta exercise,” he said.

The SGF said since the case was in court, the judiciary should be allowed to do its job, saying it was important to emphasise that the case in question “involves only the four accused persons and should not be presented to the unsuspecting public as involving the entire Senate of the Federal Republic of Nigeria.”

He disclosed that the complaint leading to the forgery investigation was reported to the police by some aggrieved senators who specifically accused certain persons.

“It is not the Senate of the Federal Republic of Nigeria that is involved and definitely not the House of Representatives,” he stressed.

The SGF said: “To bring the National Assembly as a body into this court case is totally unwarranted.  It can only be for other purposes and reasons outside the investigation and legal proceedings.

“A case of forgery is usually preferred against individuals.  This is not different.  As was the case with a former Speaker of the House of Representatives, who was accused of certificate forgery, what he did was to resign, honourably.

“The matter did not even go to court.  In that particular case, it was never orchestrated as a matter for the National Assembly.  The individual involved did not drag the entire legislature into the matter.

“Meanwhile, the separate statements by the Senate President and his deputy are, indeed, contradictory. While Senator Saraki believes Mr President has abdicated his powers and that a cabal is in charge of federal administration, Senator Ekweremadu says President Buhari has become a dictator.

“Our democracy is still evolving and being deepened.  The provisions of the separation of powers are entrenched in our constitution and should guide everyone in our conduct. The rule of law is, indeed, supreme.

“This particular case is before the judiciary and is not being decided by the executive arm of government.  All that has transpired is still within the confines of our laws. These are the rights to accuse, to be investigated and be arraigned before the court.

“To impute other considerations to the process is unfortunate.  We should allow the process to take its course, in consonance with the dictates of the law and total obeisance to the cardinal democratic principle of separation of powers,” he stated.

Reacting to the  statement issued by the Secretary to the Federal Government (SGF), Mr Babachir Lawal, that the Senate was not the one on trial in the forgery case instituted by the Attorney General of the Federation against the Senate President and his Deputy, the Senate, in a statement signed by the chairman, Senate Committee on Media and Publicity, Senator Sabi Abdullahi, maintained that it was the Senate that was the target of the present attempt to intimidate the legislature to force a laedership change in the Senate.

According to the statement, “We disagree with him on this position and we maintain our earlier stand that it is the Senate that is the target of the present attempt to intimidate the legislature to force a leadership change in the Senate.

‘’Mr Babachir Lawal should tell us how reasonable it is to conclude that when the President of Nigeria and the Vice-President are being jointly tried in a suit whose outcome can remove them from office, it is not the Buhari Government that is being targeted.

‘’It is also imperative to clearly state that contrary to the claim by the SGF, neither the Senate President, Dr Abubakar Bukola Saraki nor Senator Ike Ekweremadu were mentioned by the petitioners, the statements by those interviewed by the police or even the police report.

Meanwhile, let us refreshen Mr Lawal’s  memory about the facts of the 1999 case. It is obvious that the Senate President and his deputy are not being accused of certificate forgery as it happened in ex-Speaker Salisu Buhari’s case. Therefore, nobody should compare an apple with orange. Also, neither Saraki nor Ekweremadu is below the age requirement for their present  position as it was alleged in the Buhari case. Attempts to make the two situations look similar is to present all Nigerians as having no sense of history.

We also know that nobody can be accused of forging his own signature. The executive is in no position to determine what is the correct Standing Orders of the Senate. The Senate President and his Deputy were as at the morning of the June 9, 2015 inauguration of the Senate mere Senators-elect and could therefore not have been in a position to influence any alteration in the rule book.

The Senate as an institution, and, indeed, the National Assembly, has spoken about their understanding of the present assault on their independence by the executive. We maintain that this trial is a design by the Executive to criminalise the internal affairs of the Senate to create a distraction for the leadership of the Senate, force a leadership change and cow the legislators.

Those behind this plot find this trial more expedient and important than finding tangible solutions to the multi-various socio-economic problems bedeviling the country. However, we are sure they will fail in this attempt. We only hope they will allow the judiciary to truly and creditably perform its duties and give independent verdict on the case.