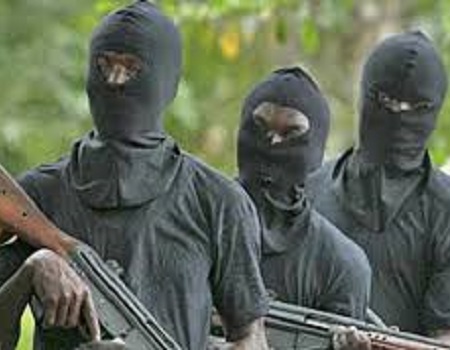 Armed robbers on Thursday attacked a branch of a bank in Ise-Ekiti, headquarters of Ise-Orun local government area of Ekiti state killing one police officer.

The robbers numbering 10 were said to have arrived the town from the Ikere-Ekiti road in two vehicles and started shooting sporadically to scare residents.

TribuneOnline gathered that the robbers gained access into the banking hall by blowing up the entrance with explosives suspected to be dynamites.

A source who spoke with our correspondent said some amount of money was brought to the bank in the morning.

He said, “The robbers came around 2 pm and we started hearing gunshots everywhere in the town. They were about 10 in number and they came with two vehicles through the Ikere-Ekiti axis. They first went to the policeman who was sitting very close to the bank and killed him.

” We observed that money was brought to the bank this morning and maybe the robbers were aware of it.”

The robbery was said to have lasted for about 30 minutes where an undisclosed amount of money was carted away.

He said, “I can confirm to you that a bank was robbed at Ise Ekiti this afternoon and unfortunately a policeman was killed.

“Our men are on their trail and we shall ensure that none of them escapes.

“Members of the public should go about their normal duties and be rest assured that we are ready to protect their lives and property at all times, ” he said.

NDLEA arrests 48 year-old with 238kg of cannabis in Edo