NDLEA arrests 48 year-old with 238kg of cannabis in Edo 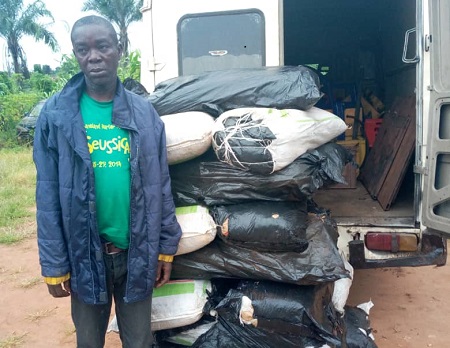 FOR  allegedly being in possession of 238 kilogrammes of cannabis, a 48-year-old man, Mr Emmanuel Anosike has been nabbed by the Edo State Command of the National Drug Law Enforcement Agency (NDLEA).

The suspect was said to have concealed the drugs in a false compartment of a bus whose owner routinely engages in interstate cannabis smuggling.

Anosike, from neighbouring Delta state, was apprehended at Abudu along Benin,-Agbor expressway as he journeyed to Port Harcourt, Rivers State based on intelligence report.

The Edo State Commander of NDLEA Mr Buba Wakawa who disclosed this in Benin yesterday accused the suspect of concealing the cannabis, weighing 238 kilogrammes in 17 bags and hide them in a false compartment of his vehicle.

He said the investigation revealed that the J5 Bus with registration number Lagos XL 591 MUS conveying the cannabis took off from Ifon in Ondo State going to Port Harcourt but was promptly intercepted by officers of the Irrua Area Command on routine patrol,”

He said to carry out the illegal act undetected, the suspects arranged few empty crates of beer on the vehicle to mislead officers that there are no goods in the bus but the drugs were detected by eagle eye officers of NDLEA.

Wakawa assured that the suspect would be charged to court soon.

Speaking with journalists, Akposike, who admitted transporting the cannabis said he was into the business to earn a living.

He confessed: “I transport cannabis to earn a living. I am not the owner. They gave me N25,000 after buying fuel and other expenses to deliver the drug in Port-Harcourt.”