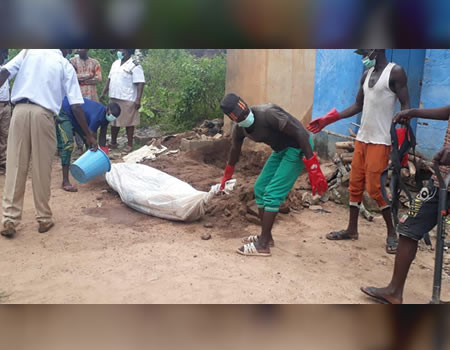 Onlookers held their hands to their chests on Thursday as two suspected ritual killers, Dotun Ogunlade, a self-acclaimed spiritualist, and Mutiu Ayorinde were taken to the shallow grave of a victim, Mrs Bose Oguntunde, at Igboora in Oyo State, where they had buried her remains after severing her head and hand, for exhumation.

Tribune Online learnt that Ogunlade, also known as Arole Jesu, courted the friendship of his victim through a social media, Facebook with a promise that he would help her in getting solutions to her marital problems and socio-economic challenges.

Briefing journalists on the killing of the victim beside the shallow grave dug for the deceased, the Commissioner of Police in Oyo State, Shina Olukolu described the killing of Mrs Oguntunde as “barbaric,” disclosing that Ogunlade lured the victim from Ilorin in Kwara State to Igboora to achieve his aim.

The police commissioner said that on her arrival in Igboora, the ‘spiritualist’ injected the woman with an overdose of sleeping drug on the pretext of solving her problem of fatigue caused by the long distance she covered to the place.

As soon as she became unconscious, the Tribune Online learnt that Ogunlade strangled the woman to death.

“Thereafter, her head and arm were severed and the remains buried in a shallow grave at Ogboja area of Igboora,” the Oyo police boss said.

He spoke further that based on credible information and diligent investigation, “the police in Igboora were able to smash the syndicate and arrest the two male culprits, Dotun Ogunlade, aged 24, and Mutiu Ayorinde, aged 32.

“Further investigation revealed that the severed parts were allegedly baked to form a powdery substance for rituals to become rich and powerful.

“Two knives used to sever the body parts, a white cloth bag containing substance inside a gourd, where the powder from the severed body parts was kept, and a bottle of schnapps were also recovered,” the police commissioner further remarked.

He added that investigation was still ongoing to unravel the mystery behind the crime and the motive for the act.

Olukolu warned individuals to be wary of strangers who pretend to be spiritual healers, particularly on social media.

“People should also be wary of the associates they keep, as well as moving from one place to the other without informing family members,” he stated.

He expressed appreciation to members of the public who gave the police information that led to the arrest of the suspects.

One of the suspects, Ogunlade, also spoke to the Tribune Online during an interview.

According to him, “I had been chatting with the woman on Facebook, but at the beginning of this year, I told her I wanted to come to Ilorin for a crusade. Later, she told me that she was under a spell and I told her to come to Igboora, and she agreed. I didn’t date her.

“Before she came, Oyerinde had come to me that he needed me to assist him. I had done some spiritual works for him before, but he said he needed something that would be faster than the previous ones. He said he could go to any length to acquire money.

“So, I asked him if he was ready to use the human body for the rituals and he agreed. I began working on how we would get a human being for the ritual.

“I invited Mrs Oguntunde, and she agreed. I didn’t even know that she could make it, but she arrived at night.

“When she got here, I entertained her. She slept on the bed, while I slept on the mat. After the second day, I called Mutiu that I had seen someone he could use. “Then Mutiu said I should start the process. So, when the woman complained of body pain, I had two sedative injections in my house and I administered overdose on her.

“She slept off and I strangled her to death.”

He said that Oyerinde brought N30,000 to buy ingredients for the ritual process, adding that the head of the victim was burned with the ingredients.

He alleged that one Kehinde Imole from Iseyin was also involved in such rites, while one Samuel Ilabe came to cut the victim’s hand and some flesh.

On his part, Oyerinde said he only requested for ritual process that could give him wealth. He said he did not demand for the use of a human being but did not oppose it when Ogunlade started the process.

He added that he put the burnt head, which had been ground into powder, in a bottle of schnapps which he was drinking before his arrest.

The remains of the victim were exhumed by health officials on Thursday and were taken to a mortuary for further investigations.