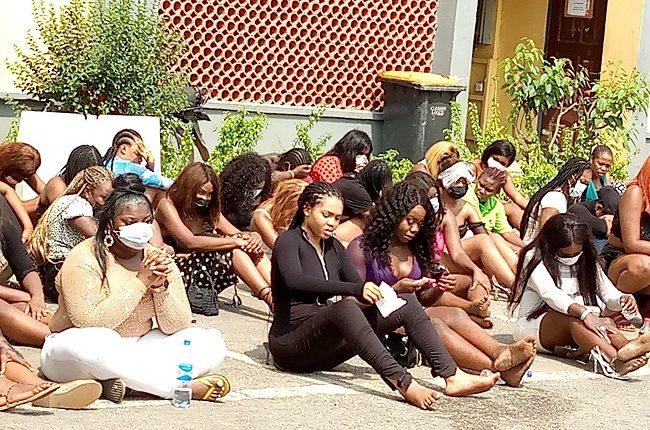 Two hundred and forty-three suspected strippers, clubbers and others have been arrested by the police in Lagos State for allegedly violating the COVID-19 protocols in the state.

This is just as the police in the state have raised the alarm on the “worrisome disregard” by residents of the state for compliance with Covid-19 protocols.

The arrested suspects included children of highly placed personalities including a retired Deputy Inspector General of Police and other top-notch in the society.

The suspects were early Saturday arrested during different operations, which were coordinated by the state police commissioner Hakeem Odumosu in Surulere and Maroko areas of the state.

CP Odumosu, while speaking with newsmen at the state police command headquarters in Ikeja reiterated the commitment of the police to fully enforce the federal and state governments’ directives against the spread of Covid -19 in the state.

The police boss said. “Generally, it has been observed that many Lagosians have disregard for compliance with Covid-19 protocols across the state, which has been so worrisome due to the consequence of such lackadaisical attitudes on our health status and the spread of the rampaging pandemic in Lagos State.

He stressed that “on Friday 8th January 2021 during a night operation that was coordinated and commanded by the Commissioner of Police, Lagos, the command pounced on some defiant night clubs, where two hundred and thirty-seven violators were arrested.”

CO Odumosu stressed that “In total two hundred and forty-three violators were arrested and are being paraded today.”

He stressed that “gentlemen of the press, the command wishes to reiterate it’s zeal and commitment to due and total enforcement of Covid- 19 protocols and orders, including the Federal Government 12 midnight -4 am curfew.”

He warned that “the club owners are hereby strictly warned to comply with the state government directives of immediately and total closure of clubs as they will not only be prosecuted but also have the building approval revocated.

“We wish to admonish Lagosians to observe the Covid-19 guidelines and protocols jealously as the pandemic is real and a global reality, which must be collectively tackled,” the Lagos CP advised.

The arrested suspected were on Saturday evening charged before a mobile court.

Ekiti PDP begins mobilisation ahead of next year’s guber poll