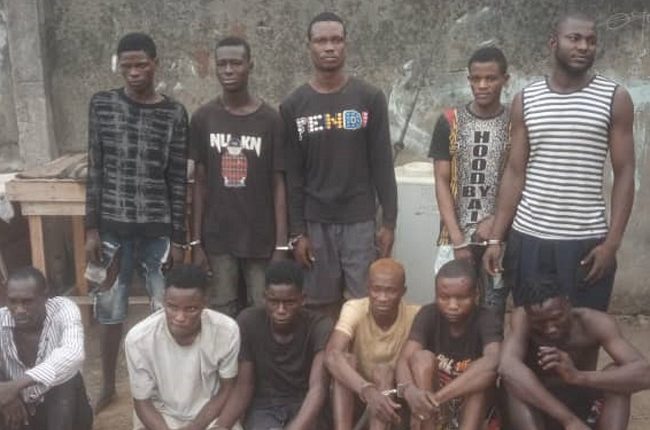 Eleven suspected cult members who have been terrorizing residents of Ketu, Mike12, Agilinti and Owode Onirin areas of Lagos State have been arrested by the police.

The suspects were arrested during different coordinated raids on criminal hideouts by policemen from Ketu Divisional Police Station. They were led by the divisional police officer (DPO) in charge of the station.

The state police commissioner, Hakeem Odumosu, while speaking on the arrest of the suspects, reiterated the commitment of the police to make the state tough for cultists and other criminals.

The image-maker in charge of the state police command, Muyiwa Adejobi confirmed the arrest of the suspects in a statement he signed and made available to Tribune Online on Monday.

Adejobi confirmed the arrest of “11 suspected cultists, who have been terrorising Owode Elede, Agiliti, Maidan, Afinjuomo, all in Mile 12, Ketu area of Lagos State, on Friday 15th and Saturday 16th January, 2021, at different operations carried out by the police operatives attached to Ketu Division of the command.

Adejobi also stated that: “Items recovered from them included one locally-made pistol with life cartridges, weed suspected to be Indian hemp and assorted charms.”

Adejobi also said that the commissioner has “directed that the suspects be handed over to the new Deputy Commissioner of Police State CID, Panti, for further investigation.”