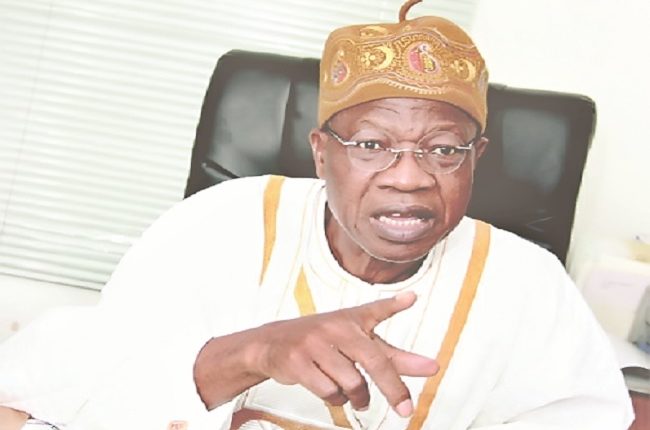 The All Progressives Congress Caretaker/ Extra Ordinary Convention Planning Committee (APC CECPC) met with aggrieved camps in the Kwara State chapter of the party on Monday.

Also in attendance were his Niger State counterpart, Sani Bello and the Minister of Information, Lai Mohammed, who led the aggrieved chieftains to the peace meeting.

Minister of State, Transportation, Senator Gbemi Saraki was not at the peace meeting.

The Kwara State chapter of the party has been polarised into factions following the removal of the erstwhile acting chairman, Honourable Bashir Bolarinwa by the APC North Central zonal executive. Bolarinwa had since been replaced with his former deputy, Honourable Samari Abdulllahi.

A faction which has Iyiola Oyedepo as its spokesman had last Wednesday accused the Kwara State governor, Abdul Rahman Abdulrasaq, his Niger State counterpart, Sani Bello and the Yobe State governor and chairman of the APC Caretaker Committee, Mai Mala Buni, of orchestrating the removal of Bolarinwa.

It was, however, countered by another group operating under the aegis of Kwara APC Elders Forum which justified the removal of Bolarinwa.

Nigerian Tribune checks revealed that the Monday meeting ended in a deadlock as the team led by Governor Abdulrasaq rejected the demand for the return of Bolarinwa, canvassed by the Lai Mohammed faction.

Both Governor Abdulrasaq and Lai Mohammed refused to talk to journalists at the end of the meeting moderated by the National Secretary of the APC CECPC, Senator John Akpan Udodehehe.

The Niger State governor who spoke with journalists, however, disclosed that the interim leadership of the party mandated the zonal executive to resolve the crisis.

Governor Bello who attributed the impasse in the Kwara State chapter of the APC to communication gap assured that the zonal executive would be fair in its judgement.

“We looked at the issue surrounding APC in Kwara State and we had a brief submission from some of the stakeholders and resolved that the matter should be taken back to the zone, the zone should look at the issues.

“We will report back to the National Caretaker Committee. So I hope that by next week, we should be able to resolve the matter at the zonal level and once that is done we can put our recommendation to the national caretaker committee for further action.

“So, it was a very short meeting that lasted maybe 30 minutes, but I think we achieved a lot. But I can also say that the cause of this conflict is mostly due to the communication gap which I hope we were able to resolve. But whatever decision we will take we will make sure that there is no bias and whatever decision will take we will make sure that it is in the interest of our great party the APC we have no intention to favour any person but to look critically at the situation and to advise the National caretaker committee on the necessary steps to take.”

He, however, maintained that the zonal executive would not sacrifice the larger interest of the party to placate few aggrieved individuals.

“Well, for me, we will try our best to see that we work out a way that will be acceptable to both parties,  if possible. But then again whatever decision we take we will look at the party first sometimes you have to take some steps to protect the party on some issues as a result of a conflict and sometimes it is difficult to have a resolution that is acceptable to all but once you do it in the spirit of fairness without any bias and you are sure you took the right decision there is nothing to worry about.  Our primary interest is to ensure the survival and strength of the party in Kwara state without having to look at anyone or anyone’s face. I  hope that we are able to find a solution that is acceptable to all and we on our part at the zonal level we will try our best to accommodate everyone. So whatever it is,  you will see that there will be some fairness and justice.”