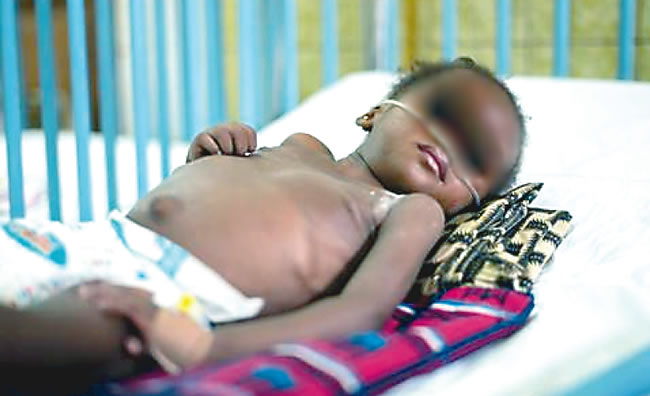 SADE OGUNTOLA writes that pneumonia is still a major killer of children in Nigeria and that unless government increases its financial support base to tackle it, the mortality rate can only go higher.

Pneumonia, a disease most Nigerians simply identify with cold and would easily wish away, is in fact a deadly disease with high mortality rate, especially among children.

So deadly is the often underrated disease that the United Nations Educational Fund brands it a “forgotten epidemic” in Nigeria. This is because Nigeria has a huge pneumonia burden of the common but curable disease which remains deadly for the poorest and the disadvantaged among individuals. In fact, Nigeria is one of five countries in the world with half of all childhood pneumonia deaths.

The 2006 UNICEF report, ‘Pneumonia: the forgotten killer of children’, was a jarring wake‐up call. The report had directed in detail, global attention to the disease which is the leading cause of childhood deaths worldwide. Since then, control efforts have been accelerated and global childhood pneumonia deaths have declined by 51 per cent through the Millenium Development Goals years – 2000 to 2015. Unfortunately, the mortality rate had only declined by a mere eight per cent in Nigeria, making the number of pneumonia deaths in the country to remain unacceptably high.

Professor Adegoke Falade, a consultant paediatrician at the University College Hospital (UCH), Ibadan, while speaking on the disease said community-acquired pneumonia kills more than 140, 000 Nigerian children annually which is almost equal to combined deaths from diarrhoea and malaria.

However, pneumonia deaths in Nigeria, he said are predominantly at the community, primary healthcare and secondary healthcare levels even as these deaths account for about one in five of deaths in children less than five years of age.

Sadly, most of these deaths probably could have been averted if mothers know simple signs that are highly predictive of the disease in a child who is coughing and ensure prompt treatment.

“For instance, a situational analysis of the disease in Jigawa and Lagos states found that care-seeking for children with pneumonia was poor in both states, with only 38.7 per cent and 31.4 per cent of caregivers from both states recognising at least one symptom of pneumonia,” he added. Common symptoms that are highly predictive of pneumonia include fast and or difficult breathing, with the lower part of the chest wall sucked in,” he said.

Professor Falade said further that mothers can easily count the breathing rate of the sick children when they are asleep or calm to determine if it is fast or normal. Counting the breathing rate in a sick child is easy, but counting shouldn’t be done when the child is disturbed and crying.

“If the child is neither asleep nor calm, then breastfeed the child to calm the child down, but counting the breathing rate while breastfeeding is not as good as when the child is calm or asleep,” he said.

In predicting pneumonia, he said all that mothers need to know is “fast breathing with or without a difficulty breathing, with the lower part of the chest wall ‘’sucking in.”  Basically, pneumonia can either be non-severe or severe.  Non-severe pneumonia can be managed at home with prescribed medicine, while in severe pneumonia, the patient must be taken to and admitted to the hospital.

Severe pneumonia is diagnosed, when in addition to features of non-severe pneumonia (fast and or difficult breathing in a child that is coughing), any of the following danger signs is present: bluish tongue, pulse oximeter (an instrument that determines the level of oxygen in the blood) reading less than 90%, grunting with every breath, inability to feed, decrease in the level of wakefulness and convulsion.

Sadly, one of the major differences between the care of pneumonia in Nigeria at the tertiary healthcare level and other healthcare levels is the availability of oxygen. Prof. Falade declared that ensuring safe, reliable, and effective use of oxygen and pulse oximeter technology for severely ill children are key to curtailing these deaths.

“Our fiding in a study, tagged Oxygen Implementation Project that involved 12 secondary level hospitals in four southwestern states was reduction of deaths from community-acquired pneumonia by 50 per cent through providing hospitals pulse oximeter. This tells when the child’s blood is deficient in oxygen and when oxygen should be given.

“This correlates with what we do at the UCH, Ibadan. When low blood oxygen level is detected in a patient, oxygen is given immediately. This, combined with good nursing care, appropriate antibiotics and prompt response when there is a complication, leads to drastic reduction in pneumonia deaths,” he said.

“Severe malnutrition decreases a child’s immune defence to infections; a severely malnourished child is 30 times more likely to die of pneumonia than a child that is well-nourished,” he added.

He also stressed the need for the promptness in treatment of pneumonia in children to reduce the fatality of the disease. He argued that pneumonia deaths were dropping more slowly in Nigeria than in the rest of the world, particularly, when other childhood deaths declined dramatically in Nigeria because the weak health system failed to deliver available services effectively, the poverty level is high and a coordinated, well‐funded, multi-sectoral effort to introduce and implement proven interventions at scale was lacking.

According to him, seven out of the 10 key Integrated Global Action Plan for the Prevention & Control of Pneumonia & Diarrhoea (GAPPD) relevant to pneumonia control are exclusive breastfeeding, pneumonia care-seeking, antibiotics and coverage of four vaccines (third dose of DPT, a first dose of measles vaccine, a third dose of each of the two pneumonia vaccines).

However, the pneumonia score for Nigeria in 2017 was only 30 per cent based on the GAPPD rating, although the required minimum is 84 per cent. When these key interventions are not present, there is a problem. So, there is the need for a coordinated, well‐funded, multi-sectoral effort to introduce and implement proven interventions at scale.

Generally, impoverished children are most at risk of this disease; the reason being that they are often not vaccinated. Further, their environment also contributes to their chance of getting pneumonia as many reside in unsanitary environments with inadequate supply of water and household air pollution.

Moreover, UNICEF declared that these deaths were entirely preventable with vaccines and adequate treatments in the form of low-cost antibiotics. Data shows that not enough children are vaccinated in Nigeria, much less for pneumonia.

Just recently, a publication entitled ‘Nigeria Strategy for Immunisation and PHC System Strengthening [NSIPSS] 2018 – 2028’ estimated that four million children were still unvaccinated in the country. The implications are obvious.

According to the most recent WHO and UNICEF treatment guidelines, the antibiotic – amoxicillin DT (Dispersible Tablet) is recommended as the first line treatment for a child with non-severe pneumonia. This suggestion was adopted by the Nigerian government in 2016 to end childhood pneumonia through the primary health care system.

But data from an ongoing Development Research and Project Centre (dRPC) showed that about 86 per cent of doctors in a paediatric ward in Niger State reported poor knowledge on treatment protocols. dRPC’s findings further revealed that from the supply end, hospitals experienced delays in procuring amoxicillin DT. And in some PHCs, the medicine was completely unavailable altogether.

However, Dr Oluseyi A. Omokore, Desk officer on Pneumonia at the Family Health Department, FMoH, Abuja, speaking on the issue said the Federal Government is addressing the situation through Integrated Management of Childhood Illnesses (IMCI) which is an integrated approach to child health that focuses on the well-being of the whole child.

“IMCI aims to reduce death, illness and disability, and to promote improved growth and development among children under five years of age,” he said.

Without adequate funding for training, job aids, and policy diffusion of the new treatment guidelines at the state level, primary health centres are unable to effectively manage childhood pneumonia, necessitating the referrals to an overburdened secondary or tertiary centre.

It is only proper that governments and donors should take a leaf from the investment and efforts made to respond to COVID-19 in order to strengthen the health systems that can tackle childhood pneumonia, not only in Nigeria, but also globally.