Arts and Culture
By Akintayo Abodunrin On Feb 21, 2021 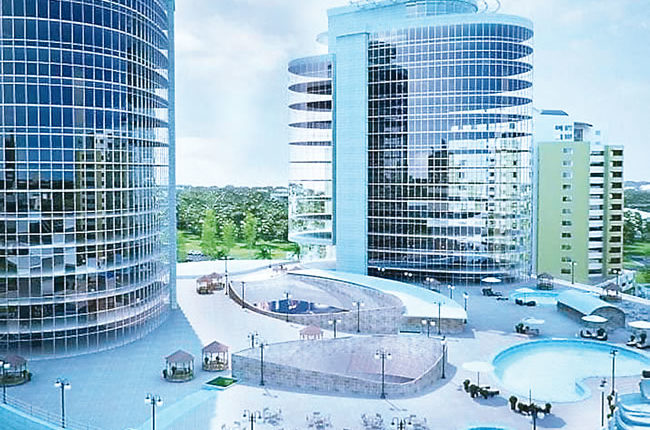 Issues about the National Theatre’s redevelopment seem to have ended with last week’s agreement between the Federal Government and bankers. AKIN ABODUNRIN examines the issues that have bedevilled a once upon a time national treasure.

TWENTY years after the journey to ‘privatise’, ‘concession’ and ‘transform into Entertainment City’ began, the National Theatre’s pesky issue appears to have been resolved. Last Sunday, the Central Bank of Nigeria (CBN)/Bankers’ Committee and the Ministry of Information and Culture signed the Memorandum of Understanding (MoU) for its renovation.

The agreement signing happened only some five days after the Federal Executive Council (FEC) approved the MoU between the parties.  The complex’s handover to the CBN/Bankers Committee will see the body renovate it and create the Lagos Creative and Entertainment Centre. It will comprise film, music, IT and fashion hubs on its expansive fallow land.

Speaking days before the FEC approved the MoU, the Minister of Information and Culture, Lai Mohammed, gushed. “This is a landmark approval because it has paved the way for investment in the creative industry as part of this government’s resolve to create at least one million jobs in the next three years in the creative industry.

“The CBN and Banker’s Committee are willing to invest N21.894 billion to renovate, refurbish and commercialisation (run it profitably) of the National Theatre complex. The MoU has a life span of 21 years, after which it will revert to the government.”

Earlier on July 12, 2020, the Federal Government handed over the national edifice to the CBN and the Bankers’ Committee, reiterating that it still retained ownership. “This iconic National Theatre remains a national heritage and will not be ceded to any person or group. We are here to hand over the National Theatre for restoration and upgrade and the fallow land within the premises to the Central Bank and the Bankers’ Committee for development. Ministry of Information and Culture holds the keys to the National Theatre on behalf of all Nigerians,” Mohammed said at the occasion.

Sunday’s agreement signing, witnessed by Governor of Lagos State, Babajide Sanwo-Olu;  Minister of Sports and Youth Development, Sunday Dare; Chief Executive Officer of Access Bank, Herbert Wigwe; and General Manager of the National Theatre, Professor Sunday Ododo, was the culmination of a process that started in 2001.

The Yar’Adua and Jonathan governments had concession processes for the national edifice, with preferred bidders emerging before the CBN/Bankers Committee stepped in with their redevelopment offer.

Speaking more about the Lagos Creative and Entertainment Centre, Emefiele explained that the Bankers’ Committee would fund a prototype cluster called the ‘Signature Cluster.’

“This facility will be a convenor – providing space, support network, business development and community engagement for the creative, cultural and technology sectors. The Signature Cluster will consist of a building each for music, film, fashion and information technology verticals. In addition to these, we will build a welcome/visitor’s centre, police and fire stations and structured parking for up to 500 vehicles,” he said.

But indifference, rather than excitement, has trailed Sunday’s sealing of the deal from players in the arts and culture sector.

Journalist-turned-PR consultant, Femi Salawu, was quick to note this in a post. “Yet to see one stakeholder in the arts, culture and entertainment sector express the slightest excitement at the news of the MoU signed by CBN Bankers committee, LASG & Ministry of Culture for the refurbishment of National Arts Theatre, Lagos? Or maybe the type of excitement I was expecting is not what I’m seeing. Was there a key stakeholder engagement in the build-up to the ceremony? There is an obvious disconnect somewhere. What’s going on?”

But speaking on the renovation, Lagos Creative and Entertainment Centre and perceived indifference, theatre director and chair, National Association of Nigerian Theatre Arts Practitioners (NANTAP), Makinde Adeniran, said it is a trust issue.

“It’s a good development, a dream we pray to come to reality. I think it’s the right business decision: give me your land, and I’ll renovate your Theatre for you.  But beyond that, the creative hubs will create employment for teeming Theatre Arts graduate. They spend four years studying the course and then divert into other fields because there are no jobs.  The hubs will create jobs for them and others in ancillary industries.  There is so much content created in Lagos but wasted because there’s inadequate and affordable infrastructure. The deal is a good one, and we pray it comes to reality. They should start work, and it should be at a speedy pace.

“Insecurity and the poverty in the country, which makes people focus more on survival, may have been responsible for what you think is the lukewarm reaction to the news. Then the fear of slow pace of execution and policy somersault when a new government comes in and cancels the deal. It’s a dream, plan we want to come to reality speedily.”

Filmmaker and media entrepreneur, Fidelis Duker, expressed mixed feelings over the development. “Yes, the Bankers Committee led by the CBN has taken over the facility, but stakeholders are still pessimistic because there is a trust issue with anything involving the government. Moreover, the details are murky. They have not spelt out how the facility will operate, considering the private sector is involved. Stakeholders were also not fully involved in the negotiations.  One would have expected that they would invite them for a briefing on their intentions.”

On the creative hubs, Duker said: “If actualised and accessible to the average practitioner in each of the sectors, the hubs will go a long way in developing the industry and also boosting the local economy. It’s a welcome development, but we must learn from Tinapa, where the facility was not accessible to the stakeholders and practitioners. This led to its collapse after the investment of huge resources.”

Artist and former chair, NANTAP Lagos, Mufu Onifade, is upbeat about the development.  He said, “I think the statement of the Minister of Information and Culture, Alhaji Lai Mohammed, is reassuring. The CBN and Committee of Bankers will renovate the National Theatre’s structure. After that, they will return it to the government. From time, the stakeholders’ grouse had been hinged on the government’s proposed sale or concession of the structure. As stakeholders, we feel comfortable that the facility would be renovated and returned to us.

“Concerning the surroundings, which the Committee of Bankers wishes to develop, we don’t have any issue with that because the original master plan of the Theatre surroundings included a 5-star hotel. General Olusegun Obasanjo’s military government would have built it way back in 1976, but they declined because the Durbar Hotel in Festac was around the corner. So, if the Committee of Bankers is now willing to build the hotel on a location that does not affect the National Theatre structure negatively, then we are good to go.”

With the renovation agreement signed and sealed, stakeholders are hopeful that the work will finish in the stipulated 15 months, and that at long last, the architectural masterpiece and cultural landmark will regain its pride.

The People’s Republic: The forces at work