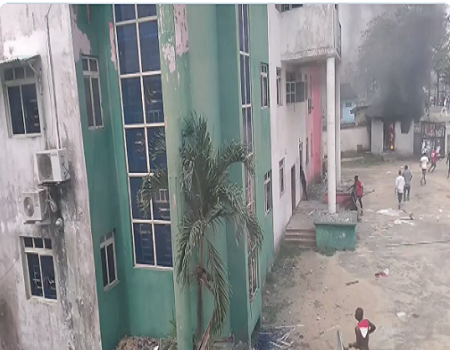 The secretariat of the People’s Democratic Party (PDP) in Bayelsa State, has been reportedly vandalized and set ablaze by hooligans challenging the sack of All Progressives Congress (APC) candidate, David Lyon, as the winner of the governorship election in the state by the Supreme Court.

The protest which reportedly began at Tombia roundabout and was ended at the Bayelsa state INEC office prompted vandalization of some PDP properties just as some government properties. The Joint military and police patrol in Yenagoa, however, stopped further assaults on properties in the area.

Before the security agents salvaged the assaults, four security post of the State high court had just been gutted by fire, billboards at Yenegoa secretariat which had photographs of PDP’s candidate Senator Duoye Diri were destroyed and PDP state secretariat was also partly razed by the fire.