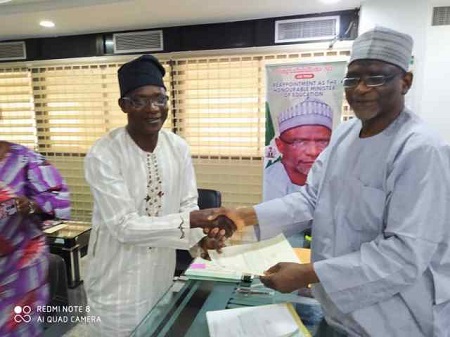 Minister of Education, Malam Adamu Adamu who announced this on Friday in Abuja, said the appointment takes effect from the 10th of January, 2020.

He felicitated with Prof. Ayeleru on his appointment, noting that the appointment was for a single term of five years.

The Minister in a statement by the Deputy Director, Press and Public Relations, Mr Ben Bem Goong urged him to cater for the yearnings and expectations of the Federal Government in the performance of his duties.

Adamu added that the conditions of service of Prof.Babtunde Ayeleru, including remunerations and fringe benefits, are as provided for Vice-Chancellors in Federal Universities.

Prof. Ayeleru who hails from Iwajowa Local Government Area of Oyo State, was born on the 12th of February, 1966.

He has academic qualifications from institutions of higher learning, within and outside the country.
Professor Ayeleru has a PhD in African Literature/Applied Linguistics; Masters degree in French Studies; Bachelor of Arts degree in French as well as other degrees.

He is also a recipient and member of various scholarships, prizes, societies and fellowships from local and international organizations.

Ayeleru, who has done and supervised a lot of research works in the academia, is a Professor of French, Applied Linguistics and African Literature.

Until his appointment, he was a three-time head of the Department of European Studies, Faculty of Arts, University of Ibadan