PATH TO NIGERIAN GREATNESS: On the campaign trail 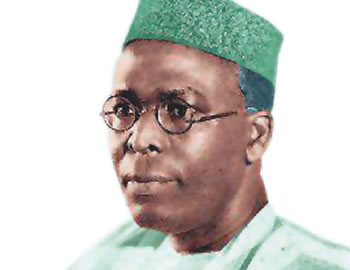 IN present-day Nigeria, however, one thing is common to the poor and the rich, and to all the gradations of social scale between the two extremes. Practically all of them are unhappy for some or all of the following reasons: their lives and properties are not as safe as before; their economic activities are in constant danger of unwarranted control, restraint, and extinction; and their welfare and freedom suffer continual derogation.

The Unity Party of Nigeria is fully conscious of the present circumstances, travail, and mood of our people. And since the present is the mother of the future, I have no doubt in asserting positively that the portents for tomorrow are very grave indeed. But we are quite prepared to grasp the nettle; and to disperse the darkening ominous clouds.

I shall presently deal with some of the areas in which we believe some drastic measures are essential, and I shall indicate in each case the kind of actions we propose to take.

However, for the avoidance of misunderstanding, I think it is apposite, at this juncture, that I should recall a portion of the press statement which I made on 22-9-78, the day after the ban on political activities was lifted. It runs as follows:

… There will be occasions when, in the course of electioneering, critical references will be made to some of the doings of the military administration since 1966. Indeed, it is our general thinking that a good number of the policies, programmes, measures, and legislations approved and now being pursued will have to be reviewed and some of them drastically revised or reversed or abandoned. And it will be necessary for comments along these lines to be made during the campaign. In this regard, let it be borne in mind always that any builder who undertakes a reconstruction or renovation of an existing structure, as we are determined to do, must at the same time do some measure of demolition. Such act of demolitionm, in no way suggests or amounts to a condemnation of the previous builders. It usually arises partly as a matter of taste, and partly to bring about new structural changes in keeping with current architectural concept. I would, therefore, like to say that whenever it becomes necessary, in the course of electioneering, indeed even in the course of this statement, to refer to and comment on existing policies, programmes, measures and legislations which are not in keeping with what we consider to be in the best interests of our people, all concerned with the outgoing regime should rest assured that no attack on their personal efficiency and probity as public administrators is intended.

In dealing with the various measures, I have not followed any chronological order or historical sequence; nor have I had regard to any order of importance. Nevertheless, I would like to be permitted to declare that our most urgent problem today is that which relates to the abject poor in our fatherland. As we have noted, about ninety per cent of our population belong to this class. So long as this huge number of people remain impoverished, our economic growth rate may continue to look good on paper, but our national development will remain depressed and subnormal.

In order to lift our country quickly from the quagmire of secular underdevelopment the Unity Party of Nigeria will, on its accession to power next October, embark on a rapid and massive transformation of the rural areas under its integrated rural development scheme. We will also take all such steps as will make it possible for farmers and the working class to enjoy a higher quality of life. In this connection, it is our aspiration that within our first term of office a worker or a farmer should have an income of a least 2,400.00 a year. Having regard to the existing cost of living, it is this income alone that, in our view, can guarantee for the worker or the farmer the means to procure the necessaries of life. And it is this size of income alone that will help to raise the productivity of our workers, promote a more rapid growth of our economy and, at the same time, enhance the development of our fatherland and our people.

It is, I believe, apposite to deal with the problem of inflation at this juncture.

Whenever suggestion is made about increasing the wages or raising the income of the starving masses of Nigeria, the reaction of the well-to-do and the rich is one of outright opposition, on the ground that such increase would bring about inflationary pressure on the economy. They appear always to overlook certain considerations.

Firstly, a person who only makes or receives subsistence or below-subsistence income or wages can never be an efficient or optimum productive agent. Secondly, development economists and all those who have given serious thoughts to the matter have come to the conclusion that a farmer’s or worker’s productivity is a function of his calorie intake. Indeed, Leibenstein, a development economist who has done extensive re-search into this problem, is categorically of the opinion “that a 21 per cent increase in total calorie intake results in an almost 50 per cent rise in output.”

It is, therefore, false economy and certainly not in the long term interest of the country, and of the rich in our midst, to pay below subsistence wages to workers, and to condemn Nigerian peasants to below-subsistence agriculture.

PATH TO NIGERIAN GREATNESS: On the campaign trail Whither the poor under the new…