Particles and Idiomatic Usage (i) 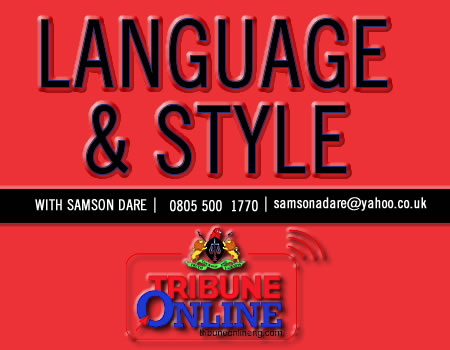 1a) We are preparing for exams.

2a) We are preparingfor the construction work.

3a) INEC is preparing for elections.

4a) We are preparingfor the meeting.

b)The hall has been tidied up in preparation for the meeting.

5) a) I am preparing for resumption.

6) a) The Super Eagles are preparing for the match.

Readers should note that although the verb emphasize does not take the particle on, the noun emphasis does.

A similar error is noted in the expression: solicit *for. The verb solicit, let us note, does not need the particle for.

1) The boys went out soliciting help for their sick mother.

2) Orphanages are allowed to solicit funds by law.

3) There is no law permitting beggars to solicit money.

4) Like individuals, nations can solicit aid from other nations.

5 Soliciting help takes something away from a person’s dignity.

6) Students should feel free to solicit books from publishing companies.

1) I came into the country on theverge of the general elections.

2) Now that the company is on the verge of economic breakthrough, nothing should be done to reverse its fortune.

3) The world seems to be on the verge of inventing the vaccine for the Ebola Virus Disease (EVD).

4) The Security Council intervened at the appropriate time: the country was then on theverge of anarchy.

5) The help came at a time I was on the verge of bankruptcy.

6) War broke out on theverge of independence of the country.

The verb form also takes the particle on:

1) The delirious outbursts verge on lunacy.

2) The expression of doubt verges on malicious suspicion.

3) His condition verges on absolute poverty.

4) Her level of education verges on illiteracy.

The verb border also takes the particle on and is synonymous with verge on:

2) The happy-go-lucky attitude borders on laziness.

3) Your attitude to your friend’s success borders on jealousy.

4) The way he has been hiding information on the matter borders on insincerity.

5) The man’s consistent refusal to obey his seniors borders on rebellion.

6) The insurgency borders on national insecurity.

Here are examples of the usage of the verb forestall:

1) The police presence is to forestall any possibility of the wild boys harassing the girls.

2) To forestall the famous scorer penetrating the front easily, two strong defence players should be arranged to tackle him.

3) To forestall an epidemic, we decided to disinfect the house.

4) To forestall a breakdown of law and order, two teams of policemen were put on patrol.

5) To forestall the Governor refusing the application, two delegates were sent ahead to plead with him.

6) The government constituted a panel that would have a dialogue with the representatives of the labour union to forestall a nationwide protest.

7) He put another lawyer on standby to forestall a situation in which no lawyer would be there to represent him.

8) To forestall a fire disaster all bowls containing petrol should be removed far from the house.

The illustrative sentences demonstrate that the verb forestall does not take any particle at all.

The following sentences illustrate the usage of the verb prevent: 1) Children were prevented from going out after 7pm every day. 2) Journalists were preventedfrom taking pictures of the gory sight. 3) Through pressure and blackmail, the president was preventedfrom taking decisions that could jeopardize the electoral process. 4) In Yoruba land, women are prevented from witnessing certain ritual practices. 5) The firefighters prevented the fire from spreading to the adjoining fuel station. 6) It was the presence of the chairman that prevented the complaints from degenerating into public riots.

In each of those sentences, the verb prevents collocates with the particle from.

Like forestall, the verb deny does not take any particle. Some Nigerian users of English have developed the habit of attaching the particle of to the verb, not realizing that it does not take any particle at all. Now read the following sentences: 1) Unfortunately, many departments were denied accreditation by the National Universities Commission (NUC). 2) People with suspicious appearance were denied access to the hall. 3) Freedom of Information Bill is to guarantee that members of the public are not denied vital information. 4) Having been denied his own share of the profit, he headed for court.  5) No bank has the right to deny anybody access to his money. 6) The lawyer complained that the suspect was sentenced unfairly because he was denied legal representation.

In none of those sentences is the word deny allowed to be followed by the particle of or by any particle for that matter.

Now compare those sentences with the following in which the verb deprive is used: 1) People who are deprived of their rights are free to go to court. 2) It is wrong to deprive children of their meals as a form of punishment. 3) No child should be deprived of education simply because his/her parents are financially handicapped. 4) Children that are deprived of motherly care will grow up to become maladjusted adults. 5) The governor has promised that rural areas would no longer be deprived of the amenities available in the cities. 6) The lady is seeking divorce on the grounds that she has been deprived of love.

In each of those sentences, the verb deprive has been allowed to collocate with the particle of.

We have complained several times in this place about the habit of some Nigerians using particles arbitrarily in the contexts of idioms. Some Nigerians, following the dictates of their feelings and fancy, would delete particles where their presence is absolutely essential; bring in particles where they are complete strangers; freely substitute particles without any regard for the idiomatic character of the expressions involved; etc. Such carelessness and arbitrariness do violence to the idiomatic integrity of the expressions.

Vision as a leadership essential (II)