• Calls for urgent distribution of palliatives 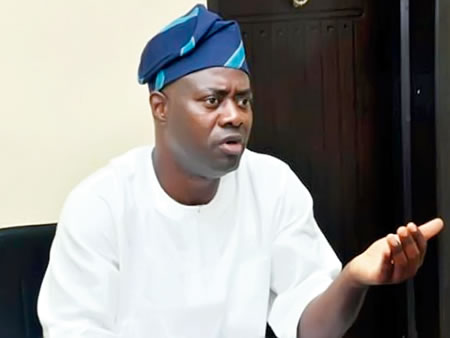 The Oyo State House of Assembly has asked the Governor Seyi Makinde led government to pay attention to the porous nature of the state’s borders and extend testing to those border areas.

The Assembly said this call became expedient due to the continued entry of foreign nationals into the state Oyo borders borders in Oke-Ogun and Ogbomoso areas.

Noting that if unchecked, the people of the state are made more susceptible to contracting coronavirus, the lawmakers urged the state governor to see to it that the border towns and routes are heavily manned by security agencies.

These calls by lawmakers for the state government to step up its efforts in containing further spread was drawn from a motion by member representing Akinyele 1 constituency, Honourable Ayo Fatokun, presented on Tuesday’s plenary.

Fatokun, had in the motion described the daily infection and death rate statistics across the nation as staggering and demanded the state to apply stringent measures to prevent community spread from areas prone to the transmission of COVID-19.

In their contributions, Honourables Akeem Mustapha of Kajola constituency, Bamigboye Abidoye of Oriire and Kazeem Olayanju of Irepo/Olorunsogo stressed that the state will save itself from a spike in the number of cases if testing is taken away from Ibadan to border towns which host several returning non-Nigerians.

Speaking, Majority Leader, Honourable Sanjo Adedoyin decried the negligence of security agencies resulting in loopholes at the borders and urged the agencies to redouble their efforts in manning the borders.

Deputy Speaker, Honourable Abiodun Fadeyi had also wondered whether the state was doing enough testing and questioned if the isolation centers, outside the Ibadan, the state capital, were truly functional.

Speaking in light of checking the influx of persons into the state throught Oyo borders, Honourable Isiaka Kazeem of Oyo East/Oyo West noted the need for the state government to evacuate Almajiris to their respective states.

Noting the hardship presently faced by Nigerians, Fatokun, in the motion, urged the executive arm to urgently distribute palliative and relief materials to the poorest of the poor and the vulnerable in the state.

Toeing the same line, Honourable Akintunde Olajide of Lagelu constituency said it was imperative for the state government to distribute wholesome palliatives.

On her part, Honourable Wumi Oladeji of Ogbomoso North constituency urged Makinde to mandate the caretaker chairmen of local government and local council development areas to embark on sensitization of the grassroots on adhering to COVID-19 precautions.

Identifying ignorance as a bane of containing further spread of the virus in the state, Honourable Seyi Adisa of Afijio constituency said the National Orientation Agency (NOA) should be tasked and empowered to put its established structure to task in sensitizing people at the grassroot.

More imperative for state government, according to Honourables Dele Adeola of Iseyin/Itesiwaju constituency and Oyeleke Simeon of Ogo Oluwa/Surulere constituency, is the need to think of how to sustain the state’s economy post COVID-19.

The two lawmakers admonished the state government to give attention to the agricultural sector by supporting farmers and all others on the agric value chain.