(OPINION): Restructuring Nigeria through replacement of 1999 with 1963 Constitution 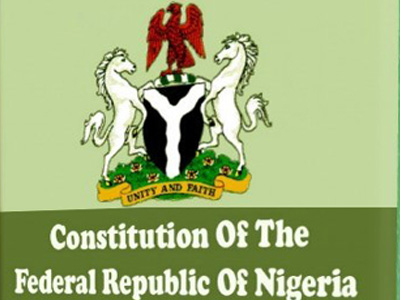 There seems to be consensus among all political divides on the desirability and inevitability of a fundamental reform of our governance framework. It is also agreed that the 1979 and 1999 editions of our constitution are fundamentally defective regarding this most basic requirement for consensual self-government by the ethnic nationalities of Nigeria. Mere amendments as have been undertaken at about 10 billion naira per iteration since 1999 by the National Assembly seems not to have doused the clamour for restructuring of the Nigerian polity. Virtually all civil society bodies drawn from the six geopolitical zones have in recent months been quite strident in calling for the country to be restructured.

If we are thus truly desirous of doing better for the present and future generations of Nigerians, it is time we confront our issues frontally and attempt a new modality devoid of fear for the unknown, as has just been done by the people of Chile.

The subsisting 1999 Constitution has problems upon which there is almost a universal consensus. The consensus however falters once the path to solutions are canvassed outside the modality of piecemeal amendments. Whereas, if we take time and think out of the box, the practical solution might be so simple to contemplate and activate by the National Assembly. Several important imperatives make it quite expedient for fundamental change vide the production of a new Constitution based on the 1963, instead of endlessly seeking to amend the subsisting 1999 constitution.

First, it is factual to assert that very many Nigerians have seen a copy of the 1963 Constitution. Those who may have seen it, are quite unlikely to have evaluated it painstakingly. Of greater significance is the fact that most were not even born or old enough to have lived through the period before 1966. What therefore subsists in the mind of many is the mere fear of the unknown.

Second, it needs not restating that there is a common understanding that the 1963 Constitution was a product of painstaking consultations here in Nigeria and through repeated Lancaster House, London conferences by the founding leaders of most segments of the Nigerian ethnic nationalities. The flavour of federalism suited to us was thus crafted in 1960 and embodied into the 1963 version. We therefore need not engage in any fruitless search for another version of framework for the Nigerian Federation.

Third, unlike the 1999 version, the 1963 Constitution is inherently federal in flavour. It embodies stipulations for regional constitutions to coexist concurrently. The regions and their constituent peoples have organic lives and autonomy of self-determination without interference whatsoever. It therefore bears no restating that our quest for better governance ought to derive from the foundation of what was carefully articulated through years of consultative talks during the period leading to independence in 1960.

Fourth, the 1963 Constitution is focused primarily on the relationships and operational modalities between the Federal and Regional governments. All residual issues are left entirely to the regional entities. It is thus not an omnibus document such as the 1999 version that pretends to define every conceivable scenario of political management of such a large territorial space as Nigeria.

Fifth, a unicameral parliamentary system in whatever modified form as embodied in the 1963 Constitution is now most appropriate for our situation. It was a false sense of being wealthy that drove the political leadership of the 1975 to 1979 era into the misadventure of toying with the presidential system. We were carried away by the inadvertent statement by the then Head of State to the effect that the only problem we had way how fast to spend Petro-dollars.

From the foregoing, it is appropriate that we immediately wake up to the reality of being insolvent and debt ridden. The present requirement for state-wide and nationwide traverse of the Nigerian territory by contestants for political offices to campaign are better done away with. The parliamentary mode of contest will significantly moderate the influence of money for political campaigns. A campaign and a win at a localised constituency is all it would take to be in parliament and the Prime Minster will be first among equals of elected representatives.

In addition to the above stated political imperatives, the reality of the present economy is the paucity of resources upon which the formulation of the political configuration of Nigeria was predicated. It is quite rational to state that our polity can no longer sustain the magnitude of public expenditure in favour of recurrent (about 80%), as against capital expenditures (about 20%) on infrastructural development. It is no longer sustainable to maintain the paraphernalia of bureaucracy at the expense of the masses of Nigerian peoples.

At the Federal level are examples of unproductive expenditures on 109 Senators, 360 House of Representative Members, 42 ministries and almost 700 departments and agencies (Oronsaye Report), all with headquarters at Abuja, but most with administrative offices headed by Grade Level 16 to 17 officers in every of the 36 State Capitals and some other cities across the country. The Federal Ministry of Agriculture and Rural Development is illustratively typical of most federal ministries. It has 11 Technical Departments at Area 11, Abuja. Nine of these departments have offices in the 36 states. This is over 300 offices in all.

Yet the ministry has no hectare of farmland. It does not maintain fish ponds, nor rear chicken anywhere across Nigeria. The bloated bureaucracy merely gulps funds just to advice State Government on how to farm.

At the state level are 36 governors, also with full complements of Ministries, Departments and Agencies. There are almost 1,000 State Assembly members, each with constituencies created based on the LGA’s numbers that are patently fraudulent on the communities and peoples they are meant to represent. These State Assembly members are also imbued with all the paraphernalia of office. These profligate contraptions need to be rolled back in a restructured Nigerian polity.

At the Local Government level, the 773 (Bakassi LGA is gone to Cameroon) LGA’s are unsustainable contraptions for just doling out funds out of the centralised crude oil sales inflows. Very few will doubt that the LGA’s as configured has been of any developmental benefit to the generality of the citizenry across Nigeria. Cities such as IBADAN (Ibadan North, Ibadan NE, Ibadan NW, Ibadan SW, Ibadan SE) and KADUNA (Kaduna North I, Kaduna North II, Kaduna South I, Kaduna South II, Kaduna South III) that are better efficiently run as organic development centres were carved out into 5 or more LGA’s, merely to proliferate political positions for chairmen and councillors, with LGA Legislative houses to boot. The legacy of the Ibrahim Dasuki Committee for the Review of Local Government Administration in Nigeria is no longer sustainable economically.

Having placed the 1999 Constitution side by side for contrast and comparison with the 1963 Constitution that our nation precipitously, albeit prematurely abandoned in 1966, it seems quite wise for the Nigerian peoples through the National Assembly to immediately roll back to the 1963 Constitution as a good point of reference, and then use it as the basis for navigation to the present through to the future.

This nation adopted the doctrine of necessity as a way out of what was then taken as impossible in terms of leadership succession after the unfortunate demise of President Yar’Adua. Another occasion has now arisen that calls for the activation of the collective will of all Nigerians in pursuit of the need to reconfigure the socio-polity of Nigeria.

A one-page Bill for an Act to substitute the 1999 with that of 1963 Constitution is now deemed to be the way forward. On passage by the National Assembly, it will be taken to the respective State Houses of Assembly for ratification. The approved Act will have annexed to it – (a) document that prescribes processes and procedures for conducting the Referendum within 3 to 6 months, (b) stipulations of the modality for updating the provisions in the 1963 Constitution to present day realities within 18 to 24 months thereafter and (c) effective date of coming into effect, preceding the date of the next elections.

Without due consideration, the idea of roll back to the 1963 Constitution being canvassed in this document will terrify some in our midst. This need not be so. First, there would be futuristic effective date of say 18 to 24 months for the new modality to be effective. The 1999 Constitution will still subsist, and political office holders will serve out their current terms. During this period would be specified various steps and acts that will bring the contents of the 1963 Constitution to the present realities.

It is also not as if Nigeria shall be immutably confined to the four regions of 1963. Rather, reverting to the status quo ante 1963 means that the process of bottom up reconfiguration will be kick started once again, based on how the Mid-West Region was democratically created in 1963. All that need be done is to produce a framework of stipulations that will prequalify ethnic nationalities in a contiguous territory for being a regional entity.

An important factor for an ethnic nationality in a contiguous territory to qualify as a federating entity would be to have demonstrable capacity to generate internal revenue sufficiently to take care of recurrent expenditure with enough surplus to contribute to federal administration. Still another factor to consider would be an outlay of not less than 50% of revenue earmarked for capital expenditure and regional development.

With the above, new regions are to be articulated and admitted as federating units over time. There is no limit of time. Those that meet up will be the subject of 2023 elections. The process of mid-wifing more regions does not have to stop at any time. We might end up with seven, eight or more regions, all coming into being through deliberate choices of the constituent peoples to exist as a functional political entity.

The regional constitutions will effectively also be federal flavoured, so that every sub-ethnic nationality can have unfettered freedom to aggregate or disaggregate as Provinces, Divisions and Districts, while being in control of their affairs without let or hindrance at whatever level of governance.

It is expected that there would be exit clause for sub-ethnic nationalities of peoples to switch between regions after due notice and referendum. Thus, no people would be in permanent bondage in terms of any initial choice to belong to a region at a given time.

The approach being proposed will in essence resolve several fundamental problems that have dodged Nigeria for years. The peoples of Nigeria will begin to have a say on the how their communities may wish to associate with their neighbours. The creation and sustenance of political entities shall henceforth be on voluntarily articulated choices, ratifies by referendum. Once the imposition from the top legacy of the military rule yields to a coherent procedure for self-determination from bottom up, the energies and the soul of the Nigerian nation will subsequently be focused of development and creation of positive identity for the largest concentration of black peoples on earth.

We didn’t breach any law on our plan to spend N14.5m on biros, N46m on letter heads, says Ministry of Petroleum