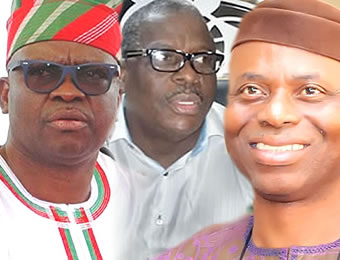 A chieftain of the Peoples Democratic Party (PDP), Senator Buruji Kashamu on Sunday reacted to the defeat of the party by the All Progressives Congress (APC) in the just concluded governorship election in Ondo State, saying that Governor Olusegun Mimiko cased it over the injustice of producing a successor from the same senatorial district where he hails from.

Kashamu, in a statement made available to news men in Abuja on Sunday said, “We told Governor Mimiko that after your eight years, the good people of Ondo State would resist the injustice of producing a successor from the same senatorial district where he hails from.

“It is not that Mr. Eyitayo Jegede (SAN) is not a good material. He is urbane, intelligent and smart. He would have probably won had he come from any other senatorial zone than Mimiko’s.

“We told Mimiko that the people would not take anything that would look like a third term for him and his senatorial district. He would not listen.

“Ever slippery and sly, Governor Mimiko turned deaf ears to wise counsel, just like he turned his back on all those who helped him to power.

“Despite being the Chairman of the PDP Governors Forum, Governor Mimiko turned himself into Fayose’s puppet, allowing Fayose to lead him by the nose.”

The Senator also lambasted Senator Ahmed Makarfi-led National Caretaker Committee of the party over the statement credited to its spokesman, Prince Dayo Adeyeye, where he threatened to sanction Senator Ali Modu Sheriff and his faction over the unending crisis rocking the party.

He advised that no one should mistake the verdicts of the Court of Appeal and the Supreme Court over the Ondo State PDP governorship ticket as their pronouncements on the party national leadership crisis.

According to him, “My attention has been drawn to news reports credited to the spokesman of the National Caretaker Committee of our great party, Peoples Democratic Party (PDP), Prince Dayo Adeyeye that the party would impose severe sanctions on Ali Modu Sheriff and his faction for all their actions intended to undermine the party’s interest.

“I wish to say that I believe that Prince Adeyeye was either misquoted or misrepresented because it is totally inconceivable that anyone who has the interest of the party at heart would contemplate such at this time.

“No one is afraid of any sanctions so long as we know that we are fighting to protect the interest of our people.

“A political party is a congregation of people with a common goal yet with various interests. In every political setting, people align and realign with the bloc or group where they feel their interest is better protected and guaranteed.

“If your bloc or group wins, it does not mean you should seek to emasculate the other because you never can tell what would happen tomorrow.

“I wish to advise that no one should mistake the verdicts of the Court of Appeal and the Supreme Court over the Ondo State PDP governorship ticket as their pronouncements on the national leadership crisis.

“They are two separate issues that I hope we can still resolve amicably. Anyone talking of sanctioning any member of the party for fighting to protect his interest does not wish the party well.”

The lawmaker lamented  that the gale of sanction in Osun, Ogun and Kwara states, would further exacerbate the crisis and lead to a gale of suspension and expulsion, adding, “The truth is: such a move will further undermine the party and its leadership.

“Is anyone saying that if tomorrow the Court of Appeal and the Supreme Court rules in favour of any of the national leaders, he should send all those in support of the other out of the party when all the 36 states are polarised along the lines of Senators Sheriff and Makarfi? No. That is not the spirit of party politics and participatory democracy.”

Kashamu advised Makarfi not to let Governors Olusegun Mimiko and Ayodele Fayose to mislead him any further, adding that Mimiko’s refusal to heed advice was what led to PDP losing the state.

“In a political party, like every other setting, people are bound to have disagreements and protect their interests. Senator Makarfi should not let Governors Mimiko and Fayose to mislead him any further. The mess that they have put the party is already more than enough.

“Both of them are at their wits end, living on past glory and in self-delusion. They have failed to manage their political successes.”