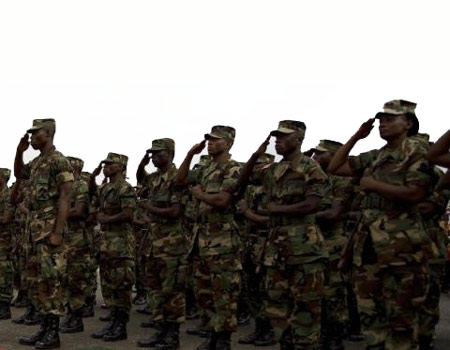 THE Ondo State Attorney General and Commissioner for Justice, Mr Adekola Olawoye, has called on men and officer of the 32 Artillery Brigade of Nigerian Army to be civil in dealing with civilians in the state.

Olawoye who made this appeal during a courtesy visit to the Brigade Commander, Brig Gen James Ataguba, in his office, said “I am appealing that army should be civil in dealing with civilians whenever they err.

The commissioner pledged to create a strong synergy between his ministry and the military on the state in assisting the army in the discharge of its statutory role in the state.

Olawoye commended the brigade’s efforts in providing adequate security in the state, saying that the ministry of justice would collaborate with the army towards checking acts of lawlessness including terrorism, ritual killings, kidnapping and the herdsmen attack in the state.

According to him, his ministry has the responsibility to make everyone lives within the provisions of the law, adding that he is aware that some of the state laws need review because of the dynamic nature of the society.

Responding, Gen Ataguba, said that soldiers were not stationed in the state to brutalise the populace, stressing the need for the people to properly understand and commend the constitutional role the army plays in the society.

“Sometimes, there are misconception and misunderstanding of Nigerian Army’s vital roles. I should say this, that soldiers are not on roads to brutalise but to ensure that safety is guaranteed. But by this visit, we are glad that you will understand our operations and our roles.

“We do have some of our personnel in mufti that checks on our personnel on the roads if they have erred because we do not condone any form of indiscipline in the brigade,” he maintained.

According to him, the ministry of justice should ensure that criminals are properly prosecuted so that others will learn their lessons.

“Please, liaise with other security agencies to ensure that there is diligent prosecution so that criminals are not back on the street when they are arrested.

“I crave your indulgence that cases are pushed to a logical conclusion and if there is any gap or review to be done, please do so, so that crime will not be persistent,” he said.