As political campaigns gather momentum in Ondo State ahead of the October 10, governorship election in the state, HAKEEM GBADAMOSI writes on the state of political parties ahead of the election. 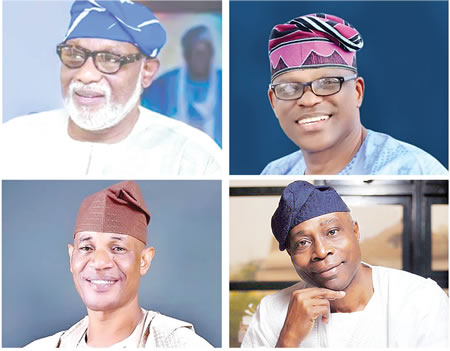 Less than eight months to the governorship election in Ondo State, the political space has come alive since the formal announcement of the election date by the Independent National Electoral Commission (INEC). Some politicians in reaction have declared their intentions to run in the race to the Alagbaka Government House under various platforms.

However, from all indications so far, the October 2020 governorship election looks set to be a two-horse race between the governing All Progressives Congress (APC) and the Peoples Democratic Party (PDP). Pundits have, however, said notwithstanding that other parties are less popular, they should not be relegated to the background. Thus, parties such as the Social Democratic Party (SDP), Zenith Labour Party (ZLP), Action Democratic Party (ADP), and Action Alliance (AA) might make a strong showing, especially if there are major fallouts from the bigger parties.

The incumbent governor, Mr Rotimi Akeredolu, had declared his aspiration to run for second term in office during the celebration of the third year anniversary of his administration, hinging his reelection bid on the call from the people of the state to continue the work of his welfarist programmes and infrastructural development.

No one would have expected this army of aspirants from the ruling party, despite the incumbent showing interest in the exalted position and with the achievements recorded by the Akeredolu administration. But political pundits attributed the crisis rocking the ruling APC in the state to the large number of the aspirants from the aggrieved members’ camps. The crisis dates back to 2016, during the party primaries that produced Akeredolu as the party’s standard-bearer. Some other strong contenders in the primaries, like Oke, Senator Ajayi, Abraham, among others, kicked and rejected the outcome of the election.

While Oke left the party for Alliance Democracy (AD) to contest in the election, Abraham, who emerged as the first runner-up, headed to court to challenge the results. Boroffice Ajayi stayed in the party, but was alleged to have watched events from afar during the election. But despite this, Akeredolu emerged victorious and became the governor of the state.

But the crisis has yet to abate three years into the Akeredolu administration, as members of the aggrieved groups have allegedly chosen to distance themselves from the government, though they remain in the party. Not even the olive branch extended to some of the leaders by Akeredolu could change the position of some of them.

The inability of the various camps within the Ondo APC to speak with one voice contributed to the failure of the party in the 2019 presidential election, with the PDP winning four out of the nine House of Representatives seats and two Senate seats. The APC also lost the presidential election in the state. The party would later redeem itself by surviving the onslaught from opposition in the state assembly election by winning 23 of the 26 seats.

Sensing danger attached to the prolonged crisis, the South-West leaders of the party, led by Senator Bola Tinubu and Chief Bisi Akande and many others, called a reconciliation meeting to bring Akeredolu and all the aggrieved party members and leaders together. Tinubu, while speaking after the meeting, stressed the need for the leaders to come together and end all bickering for the party to remain solid and a party to beat in any election in the state.

The governor, who showed that he was ready for reconciliation, took the bull by the horns by calling a meeting of the party›s Advisory Committee, which included leaders of the warring factions. The meeting, after deliberating on the crisis, constituted an adhoc Advisory Council Committee headed by Olusola Oke. The major assignment of the committee is to broker peace among all feuding leaders of the party in the state and also to find domestic solutions to the core issues identified as the root causes of the disunity within the party.

But it appears the peace move has since been fractured by a group in the party which calls itself the Unity Forum. Led by the former deputy governor in the state, Alhaji Ali Olanusi, the group had turned around to describe the reconciliatory moves as a «charade, an aberration, contraption and complete departure from what APC stands for.»

The group, after its meeting recently, said in a communiqué, that «the Unity Forum condemned the setting up of an Advisory Council in APC Ondo State, as the composition of the council did not reflect the real membership spread of the party, but the ‹yes men› and cabinet members of the governor, except in one or two local governments. The group, thereafter, called on the national leadership of the party to «do justice to the party in [the state] instead of searching for peace. This is because if justice is done, peace will naturally return as peace without justice is like a ‘peace of the grave yard.»

Apart from this, they also kicked against the choice of the former governor of the state and the pioneer national chairman of the party, Chief Bisi Akande, as chairman of the National Reconciliation Committee of the party and protested against the reconstitution of a12-member reconciliation committee, announced by the party›s national leadership. Olanusi, in the communiqué, maintained that the constitution of the committee was unacceptable, noting that some of those selected as members were interested parties in some of the crisis flashpoints, and cannot be neutral in carrying out the task.

Following the development, Akeredolu declared that a battle line had been drawn with the members of the Unity Forum. The governor, while speaking during his third anniversary dinner, said he was ready to contest for second term and fight members of the APC Unity Forum, noting that the group had been frustrating all the peace moves to end the crisis.

Analysts, however, predicted another crisis in the party, as the Unity Forum is determined to oust Akeredolu by presenting a consensus aspirant against the governor, while the opposition is waiting for the ruling party to step on a banana peel and consequently throw away the trophy.

The bond of unity in the Ondo PDP is seen to be responsible for the large number of aspirants eyeing the party›s ticket. The party, observers noted, has never enjoyed the peace being enjoyed within the party at the moment

The party was able to pull its house together after the exit of the former governor of the state, Dr Olusegun Mimiko, who left the party to Labour Party (LP) and later for ZLP to contest the presidential seat in 2019 before abandoning the ambition midway. PDP lost most of its members to ZLP, but the party was able to survive it.

However, at least 20 aspirants from the PDP have shown interest in the governorship seat. The list included the party›s candidate in the 2016 governorship election in state,  Mr Eyitayo Jegede, the national Vice Chairman (South-West) of the party, Dr Eddy Olafeso, a former commissioner in the state,  Mr Sola Ebiseni, John Ola Mafo, Boluwaji Kunlere, Banji Okunomo, Femi Adekanmbi, Dele Akingboye, Dayo Fadahunsi and a host of others.

Analysts observed that many of the PDP aspirants hailed from the southern senatorial district and a few of them hailed from the northern district, while Jegede remains the only aspirant from the central.

Speaking on the number of the aspirants, the Publicity Director of the party, Mr Zadock Akintoye, said the party never zoned its ticket to any of the senatorial districts, but assured that the best will emerged among the contenders.  His words: “Our party in Ondo State has never zoned its governorship seat and there is no history where you would find the party deliberately zoning its gubernatorial ticket.

“We have always ensured at all times that we give visible examples to show that we are a party that promotes free and fair electoral process. We will allow all contestants regardless of the zone they come from to contest in the election.

“The best of them will emerge in a free and fair election. We have more aspirants that have indicated interest to contest for the ticket of our party. Our job as a party is to ensure that there is freedom of choice by party members as to who would become the party’s candidate.”

Many political observers however did not rule out crisis in the PDP because of the large number of politicians eyeing the slot of the party. Observers noted that some of the aspirants might be nursing the fear that the primary election might not be free and fair, unless the party trims down the number of the aspirants.

Apart from this, the party›s congress, if not well handled, might result into crisis as no fewer than five people have shown interest in the chairmanship position of the party and this might tear the state chapter of the party apart if mismanaged.

The PDP chairman in the state, Mr Clement Faboyede, has promised that the party would ensure a free and credible governorship primary. According to him, PDP, the main opposition party, is ready to send Governor Akeredolu out of the Alagbaka Government House in 2020. Faboyode disclosed that PDP was making frantic effort to put its house in order across the 18 local governments in the state, assuring that the party will conduct a transparent and rancour-free primary election that will produce a popular standard bearer.

Whereas, there have been appeals from many of the party members to the leadership of the party to streamline the numbers of the aspirants in the party so as to avoid another round of rancour.  They recalled that the crisis that erupted in the party at the wake of the last governorship election contributed immensely to the loss of the state to APC.