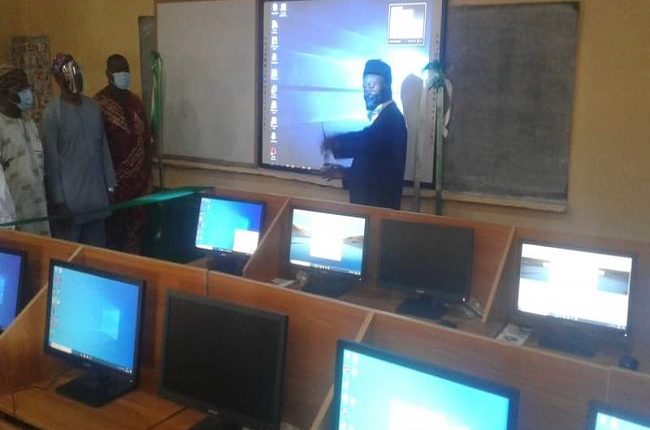 In his efforts to upgrade the standard of education in his constituency, the lawmaker representing Abeokuta North/Obafemi-Owode/Odeda federal constituency, in the House of Representatives, Honorable Olumide Osoba, a few days ago commissioned educational projects which include Information Communication Technology (ICT) centres and block of classrooms completed with furniture and other facilities built within his constituency.

Honourable Osoba who is known for his commitment to legislative efforts aimed at giving the Nigerian children a rewarding future has continued to facilitate projects that will fast track the educational development of the young people in his constituency. In line with his developmental agenda build on four cardinal points of School Rehabilitation, Transparent Representation, Empowerment and People-Oriented Programmes he has so far delivered over twenty projects in the first year of his second term at the green chamber.

The well-attended commissioning ceremony witnessed the official handing over of a brand new ICT centre at Ansar-Ud-Deen grammar school in Isaga-Orile. Honourable Osoba and his team were earlier received in a courtesy visit by the Onisaga of Isaga, Oba Oladele Tella who described the lawmaker as the best gift to the constituency. The pupils of African Primary school, Owu were not left out of the lawmaker’s school rehabilitation projects. Hon. Osoba commissioned a block of three classrooms equipped with furniture and other facilities to the delight of his constituents.

Other projects commissioned include a block of classrooms at African Church Grammar School, Ita-Eko. Also commissioned was another ICT centre built at Kobape Community High School, in Kolape. At the various venues, the lawmaker was received with warmth and excitement and commended for his people-oriented programmes aimed at empowering his constituents, particularly in the area of quality educational facilities for children in the constituency.

The chairman of Ondo State Independent National Electoral Commission (ODIEC), Prof. Yomi Dinakin who made this known while announcing the results of the election said the commission is still awaiting the result of four local government areas…Olumide Osoba commissions projects