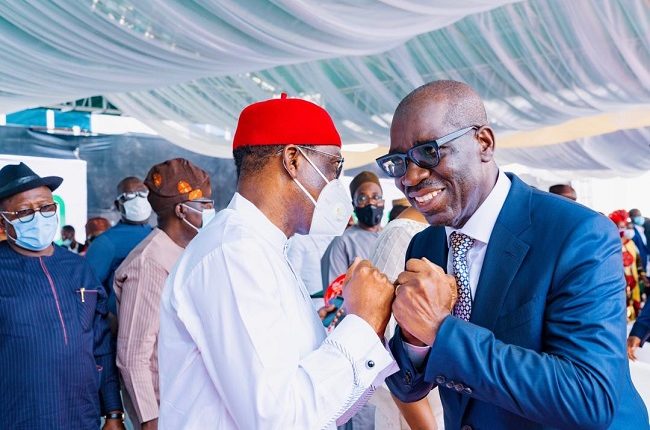 Governor Ifeanyi Okowa of Delta has congratulated his Edo counterpart, Mr Godwin Obaseki and his Deputy, Comrade Philip Shaibu, on their inauguration for the second term on Thursday.

In a statement by his Chief Press Secretary, Mr Olisa Ifeajika, in Asaba on Thursday, Okowa said that Obaseki’s emergence for another term in office was epoch-making.

He lauded Obaseki for his Making Edo Great Again (MEGA) vision which, according to him, will help in the industrialisation of the state and making it an alluring investment destination.

Okowa said that the “pleasant circumstances” that surrounded Obaseki’s new term would spur him to do more for Edo people who massively gave him resounding re-election against the odds.

He commended Obaseki for his message of unity in his second term address on Thursday, adding that only a united Edo could achieve the greatness it so desired.

“On behalf of the government and people of Delta, I congratulate Governor Godwin Nogheghase Obaseki and his amiable and loyal Deputy, Comrade Philip Shaibu, on their second term in office.

“The Edo Governorship election of September 19 testified to your undying and patriotic resolve to put the interest of the people before other primordial ones.

“I am impressed and encouraged by your call for a united Edo people going into your second term in office. The call is germane because no society can develop in an atmosphere of disunity.

“Your MEGA vision will help in the industrialisation of Edo as you work to make it a choice investment destination.

“I am quite confident that your re-election and assumption of office for a second term will pave way for you to do more for the people of Edo in appreciation for their massive support in the re-election,” he stated and wished Obaseki a successful second term.

Democratic candidate, Joe Biden has been elected President of the United States of America.Okowa congratulates Obaseki

Kamala Harris made history on Saturday with her election as Joe Biden’s vice president, becoming the first woman, first Black American and first Asian American to win the second-highest US office.Okowa congratulates Obaseki

COVID-19: Tech comes to the fore as publishing firm, UP Plc, engages stakeholders