No confirmation of oil sheen on water from our Assets - Chevron 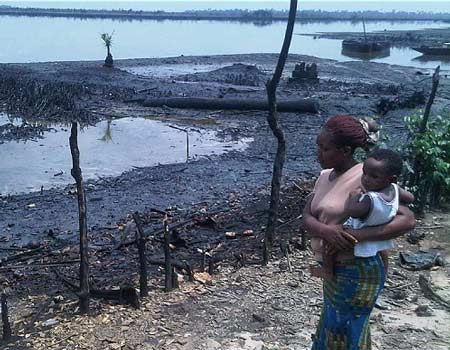 The Benikrukru communities in Gbaramatu kingdom in Warri South-West Local Government Area of Delta State has issued Chevron Nigeria Ltd (CNL), two days ultimatum or be ready for protests that will completely paralyze its operations in Abiteye field if the case of an alleged oil spill is not addressed.

The threat is coming eight days after the occupation of three of the oil giant’s oil platforms by the people in protest of recent oil spillage in the kingdom, resulting from a fractured facility of the oil company and its delay in fixing it.

But Chevron, in a recent statement by the General Manager, Policy, Governmènt and Public Affairs (PGPA), Esimaje Brikinn, jas insisted that the company has investigated and continues to survey its Assets in the Abiteye and Utonana Fields including the 16” Makaraba-Utonana-Abiteye Right of Way (ROW) with no confirmation that the oil sheen on the water is from its Assets in Abiteye, Makaraba and Utonana fields or from any other CNL facilities as alleged.

Speaking further on the subject, Brikinn, said we take incidents of oil spill seriously. Our surveillance programme is an ongoing exercise ingrained in our processes; and we respond to every report of a spill by following established industry regulatory processes, including engagements with communities and regulators, and Joint Investigation Visits (JIV), to determine the source, cause and impact of such spills. These are ongoing in the current case.”

He added that after the initial report of an alleged spill in the area, CNL conducted an overflight of the area with the regulators, Department of Petroleum Resources and National Oil Spill Detection and Response Agency, and it was confirmed that there has been no spill emanating from any CNL’s assets in the area.

However, chairman of Benikrukru communities, Solomon Eris, on Friday in a statement, disclosed that the stiff actions to be taken against Chevron over its denial of the spill would include but not limited to, the total shutdown of the organization’s source of electricity to their Abiteye station.

According to him, there will be no movement of vessels or boats in and out of the company’s flow stations as well as a cut-off and ensuring 100 per cent prevention of food supplies to their personnel at the platforms.

The communities, while lamenting the alleged nonchalant attitude of Chevron’s Chairman/Managing Director, Mr Richard Kennedy, to their plight, declared that the days of grace have eluded the company and the communities are ready to fight the oil giant to a standstill.

“Chevron has the means, but we own the trick. It has been a very painful experience for us and worse, the world has benefitted from our God-given natural resource, especially the Federal Government of Nigeria.

“They have looked on while we suffer this form of environmental degradation, killing, torture in the hands of Chevron Nigeria Ltd in connivance with its management operating in their Warri office who daily feeds their headquarters with wrong information.

“As the Chairman of Benikrukru Communities, a note of warning I have for Chevron Nigeria Limited is that our case would not be like that of Ogoni/Shell experience. For Chevron to think along that axis is to underrate our resolve.

“We, as a people, have resolved to fight this course, with Chevron. That will sound better in the ears of our children yet unborn. We will not want to be addressed or remembered by future historians as leadership that betrayed their people.

“We would not hesitate if Chevron refuses to address our demands, to approach African Commission on peoples and human rights and the United Nations agencies relevant to this case.

“It is our solemn promise to expose to the world the atrocities daily committed by Chevron in our land,” he warned.

The statement added that after the expiration of the two days ultimatum the Benikrukru communities with other communities in the Gbaramatu kingdom will pull out of the existing Global Memorandum of Understanding (GMoU) entered with Chevron Nigeria Limited, a few years ago.

“The implication of such a step is that it will set the stage for a full-blown war against Chevron and its facilities by the protesters.

“And it is my belief that the world will not blame us as we have explored every alternative dispute model at our disposal. Instead of reasoning, Chevron has all these years been killing us softly.

“With the present circumstance, Chevron and its management have so far frustrated our efforts. They have also proved beyond reasonable doubt that in the estimation of the right-thinking world, they are neither responsive nor responsible organizations.

“By refusing to address the kernel of our demands, Chevron and its management have sown in the wind and they will reap the whirlwind,” he warned.

In spite of the huge investment in the water sector by the government and international organisations, water scarcity has grown to become a perennial nightmare for residents of Abeokuta, the Ogun State capital. This report x-rays the lives and experiences of residents in getting clean, potable and affordable water amidst the surge of COVID-19 cases in the state…Tension as Benikrukru communities  Tension as Benikrukru communities