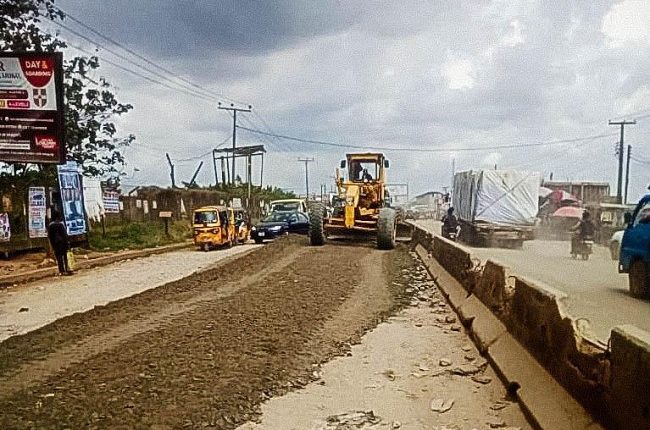 The Ogun State Government has commenced reconstruction works on federal government roads in Sango-Ota axis of the state.

This was made known by the State Governor, Prince Dapo Abiodun, on his Twitter handle on Monday, he stated that he had received with serious concern, news of the developments in the protests on the deplorable state of roads in the area.

Abiodun noted that palliative work had since commenced on Ota-Idiroko road while work will commence on the Ota area of the Lagos-Sango-Abeokuta expressway.

The governor also added that full reconstruction work on Sango -Joju road is awaiting the approval of the State Executive Council.

He said, “Let me s’ọ̀rọ̀ sókè that it is impossible for our State Government to reconstruct any Federal Road without necessary approvals from the Federal Government, yet we have carried out palliative works and will do more permanent works on these and other roads.

“Already, we have, alongside the Lagos State Government, approached and consistently pleaded with the Federal Government, to cede these critical roads among others, but we are still awaiting a positive response, so that we may ensure safe travels for the good people of Ogun State.

“You will recall that the first two road projects embarked on and completed within our first one year in office are in Ado-Odo/Ota Local Government Area, namely: the Osi Ikola-Navy and AIT/Raypower roads, showing our unalloyed commitment to our collective and unbiased betterment

“The condition of these roads has been made worse by the current rains despite the palliative works we have been carrying out pending the expected positive response from the FG.”

He urged the protesters to protest peacefully, saying it’s their rights and advised them not to intimidate or stop any protester.

“I, therefore, urge all protesters to protest peacefully. It is your right. But let’s not allow our demonstrations to be hijacked by people with ulterior motives,” the governor added.