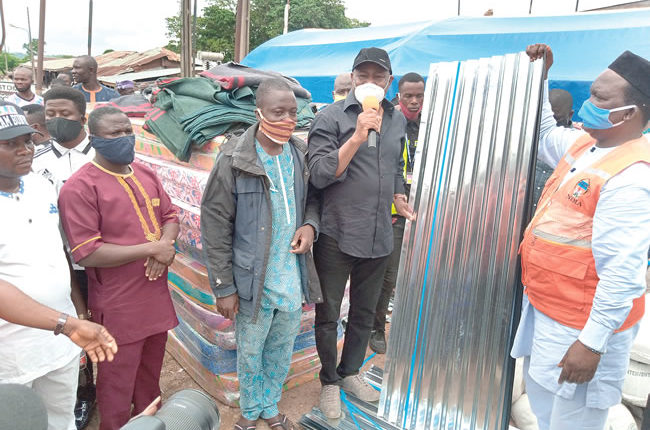 In a bid to bring succour to residents whose buildings and property were destroyed by rainstorm across Surulere/Ogo-Oluwa Federal Constituency in Ogbomoso zone of Oyo State, the lawmaker representing the constituency at the House of Representatives, Olusegun Odebunmi, has, through the National Emergency Management Agency (NEMA), facilitated relief materials to the affected residents.

The rainstorm had rendered some families homeless in Gambari, Iresaapa, Moomi 1, Moomi, Iresaadu, Iware, Odo Oba, among others. Nigerian Tribune gathered that some buildings were completely destroyed while the roofs of some were blown off. Following the destruction caused by the storms, there have been concerted efforts from different quarters of government to assist the affected people. Nigerian Tribune gathered that the items distributed to the victims included bags of cement, bundles of roofing sheets, mattresses, bags of nails, foodstuffs, among others.

Speaking with newsmen in Iresaadu, the headquarters of Surulere Local Government Area of the state, which was the venue of the distribution exercise, Odebunmi lauded the Federal Government for making the relief materials available to his constituents.

He said, “We are gathered here in Iresaadu today to distribute these relief materials as approved by President Muhammadu Buhari, through NEMA, to the people affected by the recent rainstorm in my constituency.

“I must commend the Federal Government for these relief materials. I also laud the National Assembly for approving the budget for NEMA. I thank the director-general of NEMA, Air Vice Marshal Muhammadu Muhammed (rtd), and his management team for doing the needful. The NEMA boss did not waste time even though he just assumed office when some of these disasters occurred. He did the needful immediately. Further, I appreciate the role played by zonal office of NEMA in the South-West geopolitical zone.

“We are giving the relief materials to the affected residents. It doesn’t matter whether they are Fulani, Hausa, or Yoruba. If their buildings were affected, they sure will get the materials. The names of people affected by the rainstorm had been generated immediately the disasters happened. The only thing is that we cannot add new names.”

The zonal coordinator of NEMA in the South-West, Mr Siaku Lugard, told newsmen in Iresaadu that there had been efforts by the local government authorities of the affected areas before the federal lawmaker representing the constituency approached NEMA headquarters in Abuja.

Lugard said, “When the rainstorm havoc happened, we came for an on-the-spot assessment. Buildings had collapsed completely. Then, we observed that most of the buildings were affected because there were no trees to serve as wind breakers. We reported what we saw. Honourable Odebunmi informed them in the head office, Abuja about the ugly disaster.

“I want to commend our boss, AVM Muhammadu Muhammed (rtd). He was just new in the office and he saw this and acted promptly.

“He was concerned because people were displaced. I think it is the fastest response we have ever got from the national headquarters. Within a week, we are able to get all the materials and that is why we are here today.”

Mr Lugard, however, advised residents of the constituency and the country at large to plant trees around their houses with a view to controlling the effects of wind on houses.

Asked on the level of awareness on the planting of trees, Lugard explained that NEMA had embarked on sensitisation on the importance of planting trees around houses.

“I thank Chief Odebunmi for facilitating the relief materials to us in this trying period. I also thank President Muhammadu Buhari and NEMA for doing a wonderful job,” Akande said.

Another beneficiary, Mrs Alice Adeniran from Ogele said, “After the destruction of our houses, we were sleeping in poor condition and some of us took to living with our neighbours. It is just my prayer that God should prosper the facilitator and the agency.”

Similarly, Mr Thomas Oyenira from Moomi 1 recounted, “It was a shattered hope when the ugly incidents occurred. We thank God that our representative has come to our rescue through NEMA. What we have been given has rekindled our hope that all is not lost. We thank the government at all levels.”