•Charges other leaders to emulate footsteps to douse youth aggression 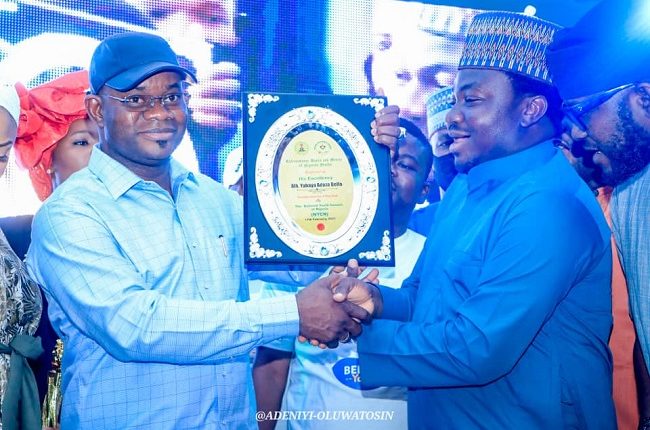 The National Youth Council of Nigeria has presented an award of recognition to Governor Yahaya Bello as the “Doyen and Mentor of Nigerian Youths” in appreciation of his youth inclusion in governance as well as support and advocacy for the Nigerian youths.

While presenting the award, the President of NYCN, Amb. Sukubo Sara-Igbe Sukubo expressed that if other leaders in the country could emulate the Governor’s youth inclusiveness drive, various youth’s agitation would be doused.

Amb. Sukubo added that no Government in the country have given the youths a voice like Governor Yahaya Bello adding that aside from the domination of his cabinet by youths, he had severally given youths the enabling environment to thrive with several pro- youths legislations, initiatives and programs.

He assured the Governor that he has the support of the youths through the NYCN’s network which spans the whole 36 states of the country.

Governor Bello who thanked the NYCN for the recognition noted that he was humbled to have been recognized by the National youth body as the ambassador for the Nigerian youths.

He also appreciated President Muhammadu Buhari for the recent appointment of a 40year old Mr Bawa Abdulrasheed as the new chairman of the Economic and Financial Crimes Commission (EFCC) nothing that he has again demonstrated his love for the youths and his desire for them to succeed him.

The Governor however expressed pain and worry over the rising intolerance between various ethnic and religious groups in a different part of the country nothing that Nigerians seem to now be taking laws into their hands and were unleashing terror against one another.

He noted that youths were the actors as victims of these recent events with several women and children also as victims adding that the end result was the worsening of the poverty condition of the country due to the destructions of properties and livelihood.

He alluded that most conflicts in the country were social-political because they were social problems made worse by politics being spearheaded by selfish interest breed of politicians who are only concerned with advancing their personal cause.

The Governor however called for honesty in addressing the social inequalities in the Nigeria Society, affirming that courage and forthright leadership were required in tackling evolving concerns of Nigeria.

He noted that in Kogi State, love, peace and togetherness have been established irrespective of tribe, religion or social class whether indigenes or visitors noting that the tool for conflict resolution was the political will not play one tribe, religion or locality against another and the rejection of any agenda that elevated normal social problem into a political weapon.

The Governor counselled that youths must not take excuses from politicians to justify the existence of security threats, they must refuse hasty generalization which demonizes an ethnic or religious group because of the criminal conduct of a few amongst them and that youths must hold leaders accountable for their electoral pledges as leaders must not be allowed to escape reckoning by playing on sentiments.