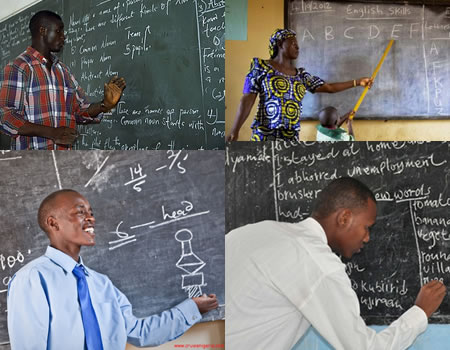 The Ekiti State Chapter of Nigeria Union of Teachers (NUT) has cautioned its members against rejecting postings to rural areas, noting that teachers can be asked to work in any part of the state and contribute to the development of education in the state.

The state government had last week directed that any teacher who rejects posting to rural areas to tender his/her resignation letter.

The new NUT State Chairman, Mr Oke Emmanuel stated this after he led the new executives of the union on a courtesy visit to Governor Kayode Fayemi in his office on Tuesday.

Oke who stressed that NUT would not condone or support any teacher who fails to report at his/her station across the state assured that the union would employ dialogue in ensuring a peaceful and harmonious relationship with the state government.

He said: “The union will not condone teachers who fail to report for their assignments. Once you have the opportunity to be employed as a teacher, you should be prepared to work in any part of the state as determined by the authorities.

“If we have any teacher that probably for one reason or the other is having any issue beyond what he or she can contend with, then the union can come to either SUBEB or TESCOM to plead for consideration but NUT will not condone rejection of posting on flimsy excuses.”

Earlier at the meeting, the NUT chairman had commended the governor for not interfering in the state delegate conference and election held in February which produced the new executives.

In his response to some of the demands presented by the union, Fayemi assured that he would not relent in his efforts to accord priority to issues bothering on capacity development and training of teachers across the State.

The governor also noted that teachers have key roles to play in imparting virtues that demonstrate the cultural value heritage of the state on the young ones who, according to him, are the future leaders.

Fayemi who expressed concerns for the protection of young ones especially the girl child against defilement and sexual molestation urged the new NUT executives to champion a campaign against girl child defilement across schools in the state.