• Pass vote of no confidence on union leadership 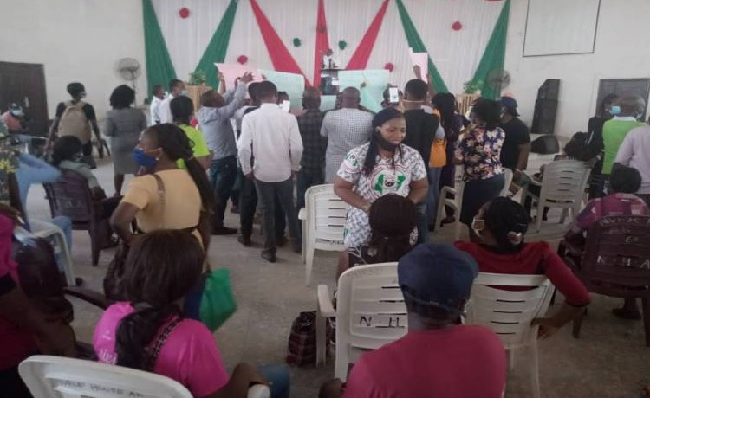 The Ondo State chapter of the National Association of Nigeria Nurses and Midwives (NANNM), on Tuesday, protested and disrupted the meeting of the leadership of the union over the payment of half salary by the state government.

The angry nurses who passed a vote of no confidence on the leadership of their union over their refusal to call for strike action, saying the leaders had compromised and expressed their readiness to pull out of the Joint Health Workers Union.

The nurses armed with placards of various inscriptions, such as ‘Represent us well or leave,’ ‘We move out of JOHESU,’ ‘Serve us well to serve the Community well. A hungry man is an angry man,’ ‘Nurses have the largest number in the health sector. We can stand alone.’ demanded for strike action over payment of 50 per cent salary for the month of November 2020.

All attempts by the leadership of NANNM in the state to pacify the protesting nurses failed to yield positive results as they sent the state Chairman of the Nigeria Labour Congress, Comrade Oluwole Adeleye, away from the ground.

They explained that they can no longer continue to work on an empty stomach and will not return to the office until all their allowances are paid.

Speaking on behalf of the protesting nurses, Ogunsi Adegbowale, said the leadership of NANNM had failed them and said, “this process is for us to get what is due to us. We are tired of collecting half salary.

“How can you pay essential workers half salary? We are being neglected. When others went on strike, we remained at our duty post. We have waited for our leadership but they have failed us. The state NANNM must issues ultimatum for a strike today. We are also tired of JOHESU. We can stand alone.

“We came to realise that our leaders agree to collect half salary. We were not carried along. We have families to feed. Some of us got N18,000 or N20,000. Some also got minus. They are owing us several other allowances. During the COVID-19 we were still working.

“We are protesting because our leaders are not representing us well. That 50 per cent is not acceptable to us. Since then our leaders have not spoken to us. We wrote to them but they refused to respond which was why we came to meet them here. We do not want wishy-washy leaders to represent us.”

The state chairman of NANNM, Olumiye Kehinde, said there was no notice for strike action by Ondo nurses and expressed surprise over the invasion of the venue of the SEC meeting.

Kehinde said, ” I tried to explain the issue at hand so that we can have concrete dialogue at the next meeting. The SEC is the constituted organ to call for strike after meeting.

“I moved off to talk to our members to allow the meeting to hold but the security agent took me away when the place was rowdy.

“There is no strike today in Ondo by Nurses. They know how a strike action is called. When you want to go on strike you must give notices of 21 days, seven days and in between, the government may call for dialogue. They know the rules. You cannot just go on strike with 48 hours notice.

“The way forward is for us to constitute SEC but members didn’t allow us to finish the issue. There is no 48 hours ultimatum by nurses to go on strike in Ondo. They knew they must go to their workplace. You must be a nurse before becoming a NANNM member. We will call for SEC when the situation improves.”

The Ondo NLC chairman, Comrade Oluwole Adeleye, said he was not at the Nurses’ meeting to address them but to prevent a pandemonium.

“I was not there to brief them. I was called about a pandemonium there and I went there. I had to call security agents and they whisked the chairman away.” he said.