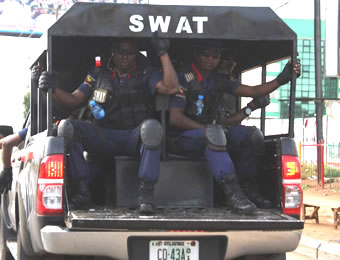 Kogi State Command of the Nigerian Security and Civil Defence Corps, has impounded 20 trucks loaded with coal over non-payment of royalty to the Federal government.

Speaking at the State headquarters of the command, the state commandant, Mr. Peter Magairi said the impounding operation was a directive from the office of the Minister of Justice and Attorney General who requested that the civil defence should swing into action to apprehend vehicles of a company who failed to pay necessary royalty

The operation which started on Tuesday, however, led to serious traffic jam on Wednesday as some of the coal drivers, when accosted to produce evidence of royalty payment, decided to park indiscriminately at the junction leading to hours of traffic jam.

The trucks were impounded in Lokoja on Tuesday after lifting coals from the Okaba community in Ankpa local government area of Kogi State.

The Coal loaded trailers were stopped at the popular Ganaja junction on Tuesday by men of the security corps during a stop operation.

Some of the drivers also accused the Civil Defence commandant of handedness, said the commandant has joined the state government to extort money from them, labelled him as wicked.

He said many of the companies also failed to show evidence of payment of annual Revenue and Environmental levy.

Magairi decried that it was more worrisome that big and well-established companies are the major defaulters in the royalty payment.

“These trucks were apprehended after lifting coals from Ankpa because those companies failed to pay royalty.

“This operation will continue until those companies comply with the directive from the Federal Government in terms of royalty payment.”

The commandant also read riot acts to illegal miners to stay clear of the state, “If those who are licensed to carry out mining activities are facing this kind of objection from us, you can imagine what we will do to illegal miners.”

Maigari, however, urged host communities to also be on the lookout and ensure to notify the command of any illegal activities in their community.