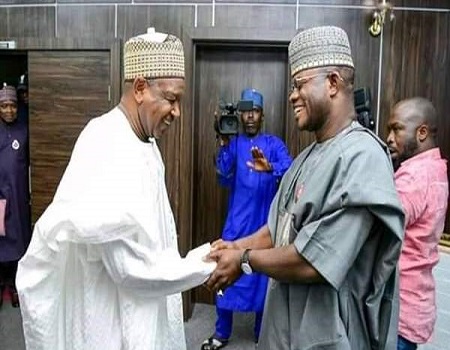 The chairman of the Progressives Governors’ Forum and Governor of Kebbi State, Senator Atiku Abubakar Bagudu has paid a condolence visit to the Kogi State Governor, Alhaji Yahaya Bello over the death of his sister, Hajia Rabietu Bello.

Senator Bagudu who was received in Government House, Lokoja on Wednesday by Governor Bello, his deputy Edward Onoja and some top government officials said he was in the state on behalf of the Progressives Governors Forum to sympathise with governor Bello over the recent loss of his sister.

He prayed to God to repose the soul of the late Rabietu and grant fortitude to the governor as well as other members of the deceased’s family to bear the huge loss.

Senator Bagudu equally stated that his visit was also to sympathise with the government and people of Kogi State over the recent attacks on one of the communities in the state which led to the loss of some lives and destruction of property.

He said the progressives Governors’ Forum condemned the attack which he described as unfortunate and urged the security agencies to ensure those behind the dastardly acts were brought to justice.

In his response, Governor Yahaya Bello thanked the Progressives Governors’ Forum and Senator Bagudu for the visit and identifying with him and government of Kogi at their trying moments.