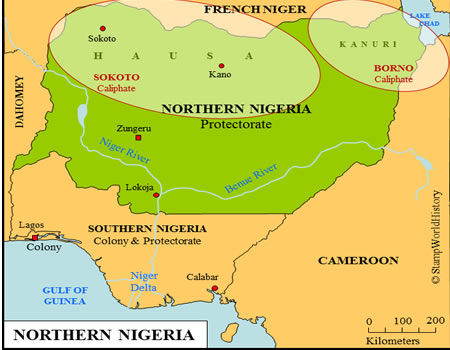 A major crack surfaced on Friday in the Northern Elders Forum (NEF) over whether Igbo people should stay or be asked to leave the north as announced during the week by a coalition of youths from the north.

While spokesman of the NEF, Professor Ango Abdullahi, declared that the position of the youths was right and should be supported by the northern establishment, deputy leader of the forum, Paul unongo countered that Abdullahi spoke for himself and not the north.

Professor Abdullahi spoke with  reporters in Zaria while Unongo spoke on telephone with Saturday Tribune.

Abdullahi hails from Kaduna while Unongo is from Benue

Professor Abdullahi, told newsmen that it was hypocritical for the Igbos to continue to live in other parts of the country while agitating for its break up.

“I am disappointed in the decision taken by Northern Governors’ Forum disowning and condemning the agitation by this young agile and progressive youth groups. Let me ask these northern governors, whom are they representing, are they representing spirits, ghost or people of the North?

“Recently, people from the eastern part of this country, specifically Igbo, were busy calling for the Sovereign State of Biafra and, from all indication, their leaders, including governors, are behind them”, he said.

He said whoever that felt the country “is not conducive for him” should quit, adding that what the northern youth groups did was not a sin.

He lamented that none of the northern governors reacted to the persistent call for the actualisation of Biafra and other agitations, noting that when Nnamdi Kanu, the IPOB leader, was released on bail recently, over 100 vehicles escorted him to his residence, including big personalities from the South West and South East.

“This is somebody who has been agitating for the breakup of Nigeria but his people were behind him. Therefore, I am behind the youths. This is because the Northern youths are pushed to the wall, we have been calming them down in any event similar to this,” he noted.

“Please, look for a book written by Adamu FiKa, the Waziri of FiKa on Nigeria’s budget before and after independence. Each year, up to the time Nigeria gained its independence, none of the two regions was able to provide for itself.

“I mean none of the Western and Eastern regions had the money to effectively run the affairs of its region until they get financial support from the Northern region,” he said.

He said the tradition had remained during the colonial era and nothing changed after they left the country, adding that it was the same money from the North that was used to construct railways, refineries and other facilities.

“However, these people tend to forget all these goodies provided by the North toward ensuring the unity and corporate existence of Nigeria. They always look down on us, feeling that northerners are parasites in this country,” he said.

Ango Abdullahi is on his own —Unongo

However, Unongo countered by saying, Ango is my very good friend. I have known him for 63 years. This is the first time I am disagreeing with him over this statement. ‘We fought a civil war where three million lives were lost. I want to say categorically that NEF has never supported and will never support the Igbo leaving the North.

‘Infact, NEF supports the Igbo to stay in the North and in any part of the country. The NEF is too mature to make such statements or align itself with the youths,” he stressed.

Unongo, who hails from  Benue state, remarked that at this material time, Northern unity is too precious to joke with,saying,’it is the Northern unity that brought President Muhammadu Buhari to power. So, what is paramount to us is to support him to achieve his set objectives rather than compounding problems of his administration. If the youths are provoked over the agitation for the State of Biafra,  we need to console them as elders. But not to allow them to continue to mislead the people of the North.

“I support Governor el-Rufai and Kazeem Shettima. The Northern leaders should talk to the youths. The youths should listen to us. The issue of Biafra is a settled issue. I participated in the war. I know the pains of the war. The Igbo too know the pains except for our children,” he stressed.

How we will eject Igbo people

The coalition of northern youths which, asked Igbos to leave the North, has disclosed a method it would adopt to get rid of south easterners from the region.

Youths under the aegis of the Arewa Citizens Action for Change, Arewa Youth Consultative Froum, Arewa Youth Development Foundation and Arewa Students’ Forum, during the week, gave the Igbos living in the North a three-month ultimatum to relocate from the region.

The ultimatum has however continued to be an object of controversy and condemnation, even as the police and Kaduna State governor, Mallam Nasir el-Rufai, have ordered the arrest of those behind the call for the relocation of the Igbos from the North.

Speaking with Saturday Tribune in an exclusive interview, on Friday the coordinator of what has been termed the “Kaduna Declaration”, Abdulazeez Suleiman, said the coalition was not rattled by the threat of arrest, declaring that the call was not aimed at breaching peace or provoking any form of violence.

“If you read our statement, there is no where we said we are going to eject the Igbos by force. What we said is that at the end of the deadline (October 1, 2017), if they don’t leave, we are going to ensure that they leave through peaceful means. I mean self-exit”, he said.

Suleiman also disclosed that the support base of the youth coalition was solid, adding that its membership base has increased from the nine groups that initially signed the “Kaduna Declaration” to 16, while talks were still on with other groups.

“We are steadily increasing in number. Nine groups, as you are aware, signed the “Kaduna Declaration”. Now we have 16 groups and we are still talking with many other groups and associations. I want you to know that we are equally receiving tremendous support from our northern brothers and sisters. They are calling and hailing us, praying for us”, he said.

Challenging Governor el-Rufai to go ahead and arrest members of the Arewa coalition, he said, “To be candid with you, we are not rattled with the order of arrest by the Kaduna State governor. This is because we believe in the cause we are pursuing and, more so, we did not call anybody to embark on anything that will breach the peace or cause violence.”

“Since when they gave the Fulani ultimatum to leave their region, there has been no any prominent Igbo leader or governor that has come out to condemn their action. Other people who live in other region have landed property in the North, but go and check whether a typical Northern owes anything in their area.

“They call us all such of names and nobody has ever told them to stop. We feel that enough is enough. Let everyone go back to his basics. Now, our leaders are calling for our arrest, whereas since they started their agitation, no governor in the South East has called for their arrest. You can see the hypocrisy of some of our own leaders”, he said.

Given reasons why the quit notice was limited to the Igbos living in the North, Suleiman said the other Nigerians, especially those from the South West, were not asking to pull out of the country, but were rather asking for restructuring or true federalism.

“In the presence of everyone, this group of Igbo youths shut down the entire region. Our people (northerners) who went to pursue their legitimate businesses in the South East were unfortunately caught in the web of this madness.

“Even President Muhammadu Buhari was not spared as he too was given ultimatum. Since we were granted self rule, the North is always at the receiving end. We believe what we are doing is right”, he said.

The youth leader however debunked the insinuation that the Arewa youths coalition has the backing and support of the northern elite, saying the governor would not have called for their arrest if they have the support of other leaders.

“If we are receiving the backing of these elites, will the governor of Kaduna State, Mallam Nasir el-Rufai, call for our arrest? He knows that we don’t have anybody that is backing us. That is why he ordered for our arrest. We have not gone anywhere. We are still in Kaduna”, he added.

•Says Arewa youths have support of their leaders

Mazi Kindness Jonah, a chieftain of the Ohaneze Ndigbo, has said the ultimatum given by the Arewa coalition was in order, adding that the Igbos should find their way back to the South East before they got entrapped in any premeditated killings.

Speaking with Saturday Tribune in response to the quit notice, Jonah said Igbo should take an urgent step to avoid a repeat of the massacre that occurred in the North, shortly before the late Chief Odimegwu Ojukwu declared Biafran Republic in May, 1967.

He also declared that, contrary to the claim by the Arewa youth coalition, the three-month ultimatum issued to Igbos to quit the North had the full support of the northern leaders.

“In 2008, when there was a pogrom in Jos during the administration of the late President Umaru Yar’ Adua when many Hausas and Plateau Christians, including other people, were killed, I led a group of activists to Azi Nyoko Youth Complex where we categorically stated that the repeated killings in Jos was religious.

“From this analysis, I clearly stated that the quit order is in order. Let us recall what happened in March and May, 1967 before the declaration of Biafra Republic by the late Chief Dim Odimegwu Emeka Ojukwu, Particularly in May 1967, a quit order was given to Igbo living in Northern Nigeria which they neglected.

“In March 1967, a similar quit order was given by the Islamic hegemony of Sokoto Caliphate, but Ojukwu, negating that order, encouraged Igbo to go back to the North in reaffirming his faith in one Nigeria. Drawing semblance from these two issues, the ultimatum by the Arewa coalition is in order”, he said.

Mazi Jonah however said Igbo would not retaliate, should the Arewa youths carry out their threat to expel the south easterners from the North, noting that they had been warned before such an occurrence could take place.

“If the threat is carried out, which we know they will, Igbo will not do anything in line of retaliation because to be forewarned is to be forearmed. Had they spontaneously kill Igbo without any pre-information, then Igbo had the right to retaliate.

“For our brothers living in the North, when they come back home, they will 100 per cent be accommodated. We have, in unison with Ohanaeze Ndigbo Youth Wing, drafted a proposal for the resettlement of Igbo from Northern Nigeria.

“We have mapped out two strategies; the building of two international markets in Igboland and a sensitization programme geared towards preparing Igbo that they must leave the North”, he said.

He also said the northern youths who issued the quit notice would not be arrested, adding, “I want to tell the world why arrest cannot ever be made. It cannot be made because the quit notice dished out is the whole whims and caprices of Northern Nigeria in total tandem with the Arewa youths.

They (the Arewa youths) are well informed because you cannot go to such a hallowed chambers like the Arewa House and make such a sensitive comment without the express approval of the powers-that-be,” he said.