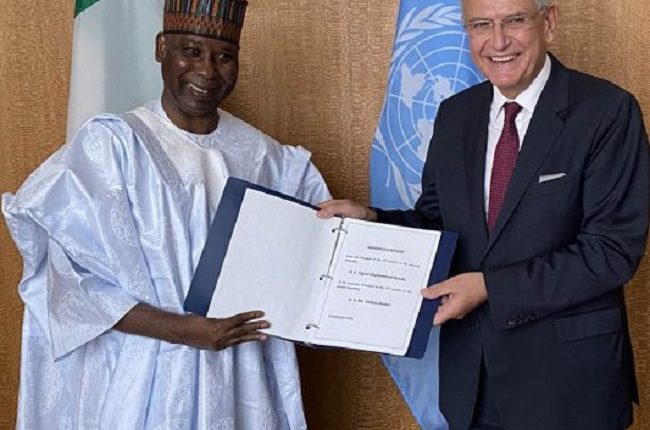 Nigeria’s Permanent Representative to the United Nations, Amb. Tijani Muhammad-Bande, on Tuesday, bowed out of office as President of the 74th session of the General Assembly.

He handed over the gavel to Turkish diplomat and politician, Volkan Bozkir, who will be steering the ship of the 75th session of the 193-member lawmaking body.

The News Agency of Nigeria (NAN) reports that the change of baton took place during the closing ceremony of the 74th session.

In his remarks, Guterres said the 74th session was like no other in the 75-year history of the UN, citing the COVID-19 pandemic made the last seven months extremely difficult for the world.

The UN Chief congratulated Muhammad-Bande for his sterling leadership that saw the 74th session completing its full programme of work in spite of the enormous challenges.

“It has been a privilege to work with the General Assembly, our common platform for international consensus and action, during these difficult days, under the leadership of His Excellency Professor Tijjani Muhammad-Bande.

“He made great efforts to ensure business continuity through regular convening of the General Committee and other online briefings.

“On a personal note, I would like to thank Professor Muhammad-Bande for his wise, determined and serene approach to those unforeseen challenges, and his excellent judgment under pressure.

“I commend the patience and support he has demonstrated during these unprecedented times.’’

Guterres also thanked representatives of member-states for their support and cooperation, urging them to extend same to Bozkir in the 75th session.

In his inaugural speech, the new General Assembly president thanked Muhammad-Bande for his “considerate and steady leadership.

“Your Excellency, you once described yourself as a perpetual student. Your efforts to navigate the General Assembly through these difficult times proved that you also a fast learner.

“Since the start of the pandemic, the office of the President of the General Assembly under your direction has guided the work of the body transparently and effectively.

“You have shown a strong leadership; I look forward to continuing to champion the priorities of you term, including poverty eradication and inclusive and equitable education for all.

“These Sustainable Development Goals are crucial to the future prosperity and peace of our planet.

“On behalf of all member states, I would like to thank you and your team once again and look forward to continuing to work with you as the Nigerian Permanent Representative,’’ Bozkir said.

In his closing statement, Muhammad-Bande thanked the Secretary-General, Presidents of the Security, and Economic and Social Councils, and heads of other organs of the UN for their support.

He expressed gratitude to President Muhammadu Buhari for nominating him for the post, and the African countries in the UN for their endorsement.

“We started this session guided by the hopes and aspirations of the people we serve.

“From the beginning, I entreated Member-States to give due attention to a number of critical issues.

“In particular, I urged them to tackle the root causes of conflict by galvanising multilateral efforts for poverty eradication and zero hunger, quality education, climate action, and inclusion (including gender equality).

“As illustrated in the handover report, the General Assembly has made great strides in these areas,’’ he said.

The Nigerian envoy echoed the call for a recommitment to multilateralism and global cooperation to defeat the COVID-19 pandemic and attain the Sustainable Development Goals.

He said the first high-level meeting of the 74th session centred on global health, little did it know that COVID-19 was around the corner.

The pandemic, according to him, underscored the need for deeper multilateral cooperation in the health sector, as in other areas, to build a healthier and better world for all.

“It is important that in achieving this, we must continue to deepen cooperation to ensure that despite the challenge posed by COVID-19, we will meet the goals and targets that we set for ourselves by 2030,’’ he said. (NAN)

No train was attacked by bandits in Kaduna ― Police