Nigeria’s breaking point might be closer than we realise —Mabogunje 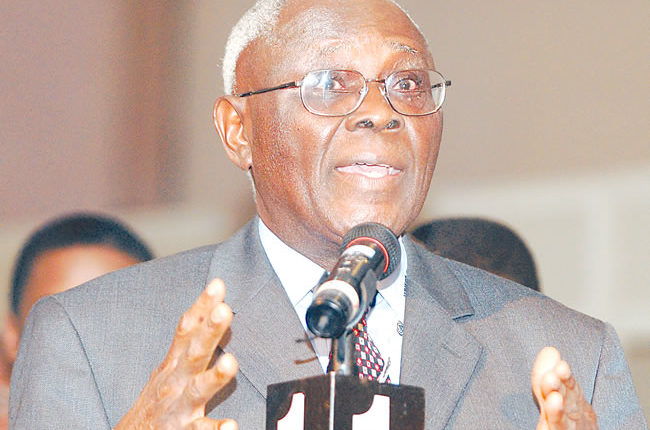 The last interview granted by the erudite geographer, Professor Akin Mabogunje, to any media organisation before death came calling was with Sunday Tribune’s DARE ADEKANMBI at his Bodija residence and published on Sunday, January 10, 2021. The issues raised by the elder statesman in interview and which he called the attention of the political leadership to still echo in Nigeria today. The interview is reproduced below.

The Buhari Presidency has been accused of being heavily skewed in favour of the North which is firmly in charge of key positions. What do you make of this?

Some people are even talking about the need for zoning to be set aside in picking his successor, that we should look for the best man for the job even if the person is from the North?

If they did that, what do you think the South would do? What will happen if the people who want to bring a northerner win? In the South, we accepted that the power rotation must be orderly.

It is okay if you think so. But how long do you thing the so-called subjugation of the South will last? You see, some of those things are because people don’t add consequences to their thinking. What Buhari has done is, in fact, to make the southerners more suspicious of the Northerners. If another northerner is put as a successor and it goes on that way, how long do you think it will last before we now say ‘to your tent oh Israel.?’ And when we say that, there is no more Nigeria and people are already suspecting that we are getting close to that. Buhari is not building a country. He thinks he is building an empire for the North. Well, let him go on trying. Unfortunately, all I can think of is my departure.

Senior citizens like you would probably be proud of the Nigeria you grew up in. But today, most citizens, particularly the young, are not so proud of the country they have. Do you feel sad at the turn of events in the country today?

Yes, I feel very sad. Some of the consequences of what is going on now are not very obvious to the players on the political stage because they are not looking far ahead. What is Buhari going to gain out of a situation like this? Remember we have been having a situation in which he has continued to behave as if there is no Nigeria and what we have is only the North. But, is there a Nigeria in the real sense of it? They have tried to keep youths like you out of where power lies. But how long can they do it?

I would say we too have not been too anxious for power and they seem to get away with it. The only time the youthful population will ask for a change is when their own children begin to suffer the consequences and they say no more of that. Then we start having problems. The country has been peaceful so far because there has been no real challenge and we have made it such that we don’t feel it too early that we have been cheated. But when you start to, something must give way. It is either the country does not hold together as one. And some of our political leaders have been hinting at that for some time. But the reason they have not come out to say now we must fight for our right is because they are not sure how quickly people will follow them. But if it becomes too glaring, they won’t have that problem of how long it will take.

You are close to former President Olusegun Obasanjo and today he remains a leader that many people still look at as being detribalised, more than 13 years after he left office…

And why do you think that is so? It is because he headed this country. At a point in time, he was the leader we all knew. So, we had to listen to him. There are those who could then say Obasanjo could have done us better that he did. There are also those who say if he wanted to keep the country together, he had to do what he did. There is no answer to either of those easily. But he acted what the situation at that particular time dictated. Some of the things he did then, he can’t do now. Otherwise, people will feel he is trying to sell the Yoruba to the North.

Leadership is a problem always in this country and you have to be, I was going to say keep praying that God will show us the leader that will lead this country so that we don’t go on a war against each other. Some of the things we have been doing, where will they lead?

Nigerians have been described as the happiest people on earth, despite the unnecessary challenges that they daily face from the leadership. Fuel prices have been increased about three times and there were no demonstrations from the citizenry probably because of their so-called resilience…

Why do you think the citizens are resilient and can’t demonstrate on the streets now? It means Nigerians are comfortable with what is happening. Evidently, they are comfortable. If they are not, they will protest. And we might get there, but not now. They appear to be comfortable now. But who will lead them? Is it Bola Tinubu? Is he not comfortable?  Any of those things needs a leader and for a leader to really emerge, things must get to a point that people will say this is not what we bargained for. Evidently, we are not there yet. If we get there, this country would not be like this. We are not that poor that we can have a leader that can make us get going and throw out Buhari and his team. Evidently, people are not as uncomfortable to think that death is better than this. They are still eating three meals a day. They are still doing some of the things they love doing. So, they don’t feel oppressed. They don’t feel the situation needs a change. They see people like you as just being academic. The challenge is still there for your generation to solve.

So, are you saying your own generation can’t do anything about it?

Maybe our generation should wait till things get to a head before acting to save the situation?

If that is what we need to make a change, why not? In fact, you might be looking for a southerner to change the system and yet it could be a northerner that will change the system. You don’t know what the young people in the North are thinking too. At the moment, it looks as if everything is okay for Nigeria and you can immediately think of what will be the breaking point. And yet the breaking point might be closer than we realize. You talking as a southerner not happy with what is going on, we don’t know what a northern youth is thinking of. Is he asking: Is Buhari the best the North could produce in terms of leadership? Who is leading the country now? You think it is Buhari? Is this the best he can produce even among northerners? Is he being thought of as doing the right thing? I am thinking more of my exit than I am of Nigeria.

God will spare your life to see many more happy years. Old age, for me, is not a prerequisite for death. The ripest fruit may not first fall and the Nigeria of your dream may be realised during your lifetime.

Well, I will thank God if it happens. But in terms of probability…

Yes, that is true. But one of the things that determine in a slow way is your ability to continue to fight and not only will the strength will be giving, your willingness to make the strength give way gradually sets in. I don’t expect much from this generation in which I am a part. For me, there will be home call some day. I think I have done my best for my generation. All I am waiting for is to be called to the great beyond. On the other hand, if there is any challenge that still comes my way at this age, then I will be forced to return to the battlefield. But I won’t go looking for the battlefield. But if anything happens to make me feel there is a challenge, then I have no option but to give what it takes.