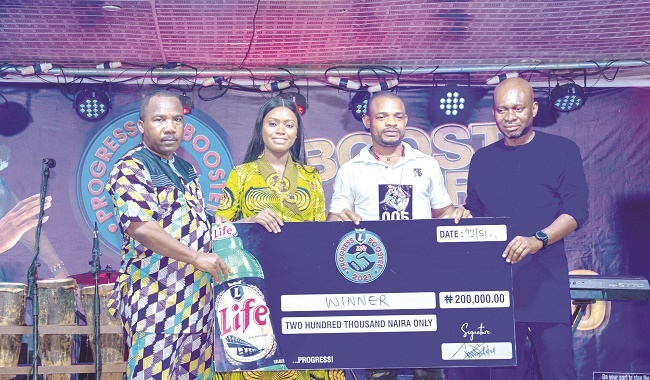 Nigerian Breweries, brewers of Life Continental Lager and Goldberg Lager Beer have announced plans to continue their tradition of investing in artisans and small businesses through the Goldberg Isedowo and Life Progress Booster initiatives.

The 2021 Life Progress Booster initiative was flagged off last weekend, while Isedowo’s project is set to launch this weekend. The empowerment platforms have impacted nearly 1000 businesses and artisans with grants of N200,000.

Launched in 2015, Life Progress Booster focuses on rewarding enterprising minds with the sum of 200,000 naira to help them implement ideas that will scale their business operations. Since inception, the CSR project has supported at least 600 businesses, mostly in the south of Nigeria.

The Isedowo initiative on the other hand has been focused on supporting Goldberg’s consumers in the informal sector since 2017, building relationships with informal trade associations to ensure it is able to reach more artisans and support their craft. Beyond its empowerment goal, it has also become a seal of approval and encouragement for hard work among the average southwesterner in Nigeria.

Commenting on the impact of these campaigns over the years, Kehinde Kadiri, Portfolio Manager, Mainstream Portfolio, Nigerian Breweries Plc., said it has been a delight to watch the Life Progress Booster campaign grow and help many businesses in the southern part of Nigeria scale and achieve some sustainability. She added that “these projects are important considering the economic issues and rising rate of unemployment in the country, as they are the best reminders that hard work always pays.”

Life Progress Booster is expected to cover Rivers, Delta and Edo states, in addition to the five states of the South East, while Goldberg’s Isedowo will go through Ondo, Osun, Oyo, Lagos and Ekiti states.

In the last four years, Goldberg has awarded at least N3,000,000 to 100 artisans, mostly within rural communities in the target states that it has reached, also celebrating their successes with exciting large scale experiential events.

At the Progress Booster activation events, consumers can submit their business plans as entries to win N200,000.

Goldberg Lager was launched in 2009, 28 years after Life Lager Beer was first brewed in 1981 in Onitsha. Both beers are consumer favourites in the south-western and southeastern parts of Nigeria due to their quality and recognition of the culture of its consumers.

In spite of the huge investment in the water sector by the government and international organisations, water scarcity has grown to become a perennial nightmare for residents of Abeokuta, the Ogun State capital. This report x-rays the lives and experiences of residents in getting clean, potable and affordable water amidst the surge of COVID-19 cases in the state…Nigerian Breweries set  Nigerian Breweries set

The Lagos-Ibadan railway was inaugurated recently for a full paid operation by the Nigerian Railway Corporation after about a year of free test-run. Our reporter joined the train to and fro Lagos from Ibadan and tells his experience in this report…Nigerian Breweries set  Nigerian Breweries set