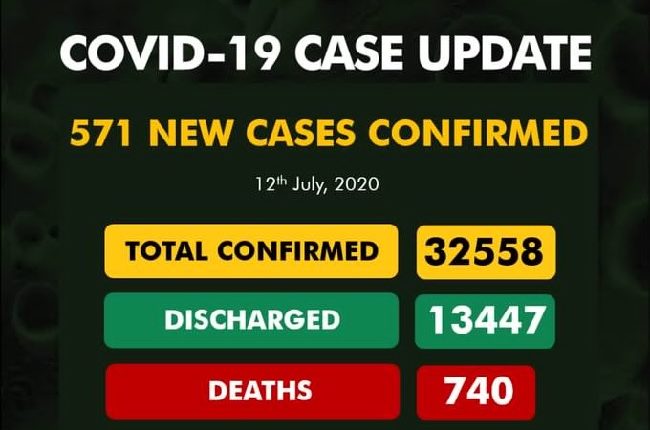 Nigeria has recorded 571 new cases of coronavirus, bringing the total number of infections in the country to 32,558.

Buhari Calls For Africa Common Position On Asset Recovery
On the occasion of Africa Anti-Corruption Day, President Muhammadu Buhari has urged African leaders to ensure the immediate actualisation of the Common African Position on Assets Recovery (CAPAR), as the continent celebrates Anti-Corruption Day, July 11, 2020… Read Full Story
Tell Babalakin Not To Come To UNILAG, ASUU Asks Minister, NUC
The Academic Staff Union of Universities (ASUU), the University of Lagos (UNILAG) branch, Akoka, has asked the Minister of Education, Mr Adamu Adamu and the Executive Secretary of the National Universities Commission (NUC), Professor Abubakar Rasheed, to prevail on the Pro-Chancellor and Chairman of the… Read Full Story
Controversy Trails Wedding Of Malami’s Son As Guests Flout NCDC Guidelines
Controversy trailed the wedding Fatiha of the eldest son of the Attorney General of the Federation (AGF) and Minister of Justice, Abubakar Malami (SAN) held on Saturday in Kano state… Read Full Story
Lagos Govt To Enforce Demolition Of Distressed Buildings
Dr Idris Salako, Lagos State Commissioner for Physical Planning and Urban Development, says the state government will enforce the law on the demolition of distressed buildings… Read Full Story
Uneasy Calm: How Pupils, Students Are Getting Their Grooves Back After Three Months
THOUGH the Federal Government is dithering on the resumption of academic activities in schools across the country, the Oyo State government recently took a bold step and announced that academic activities would resume in schools, with the forerunners being pupils in primary six and secondary school students in JSS3 and… Read Full Story