Nigeria needs leaders who will unite the country —Osinbajo 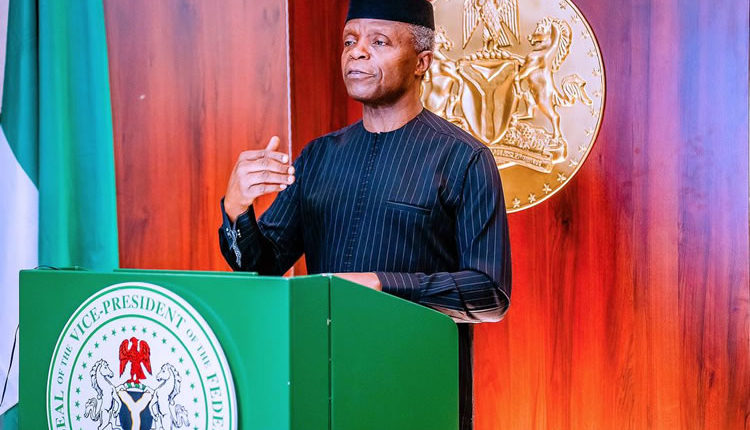 Vice President Yemi Osinbajo, on Monday, observed that with the challenges affecting the country at this time, there is a need for proactive leaders who are prepared to bring Nigerians together.

He made the remark in Lagos at the weekend during a courtesy visit to the palace of Oniru of Iruland, His Royal Majesty, Oba Abdulwasiu Omogbolahan Lawal, on the occasion of the monarch’s first coronation anniversary.

According to a statement issued by his spokesman, Laolu Akande, while commending the Oba for being a leader to people of diverse socio-ethnic backgrounds, Osinbajo said, “our country needs all the leaders, the best leaders, the most proactive leaders, leaders prepared to bring the country together. Lagos is a microcosm of Nigeria, everybody is here, if things work out well here, things will be okay in the country.”

Osinbajo told the Oniru: that “I am sure your role here is that of someone who brings together communities not just Yorubas, but everybody. And I can see that from your choice of chiefs, you have gone to other parts, and I think this is the attitude of great leaders.”

The statement said while praying for the Oba for a successful reign on the throne, the Vice President said the progress of his kingdom and its people will be determined by the quality of leadership he provides, which is a yardstick to measure the role of traditional rulers in the country.

The statement quoted him as saying: “you should know that you are always in my prayers because I believe that your role is crucial not just for the development of this state, but for the whole country.

“Today you cannot relegate traditional rulers because of the exposure and education of those who occupy that position.”

On his part, the Oniru of Iruland thanked the Vice President for his leadership and commitment to the progress of the country.

While pledging the support of the entire kingdom for the Federal Government, the Oba said the Vice President’s leadership is an example for other leaders across the country to follow, noting that “you are a leader whose direction we will continue to follow.”

His words: “the relationship between the Vice President and I had been very cordial. We belong to the same school of thought. He calls and advises me on several issues.

“I want to assure you, Mr Vice President that I will not disappoint you, I will ensure the progress of this kingdom and I will be just.”

Also speaking later in an interview with journalists at the palace, Osinbajo said the future of Iruland is bright with an Oniru like Oba Abdulwasiu.

He stated: “I have known the Oniru for quite some time now. He is somebody who I have a great deal of respect for, and I know that the future of this community is bright with an Oniru like himself.

“He is not just someone who is thoroughly educated but a visionary. He is someone who sees the future and is ready in ensuring that he brings the future in a very short time.”

Nigeria needs leaders that can unify it at this time ― Osinbajo

Nigeria may not celebrate another Democracy Day except… —Soyinka