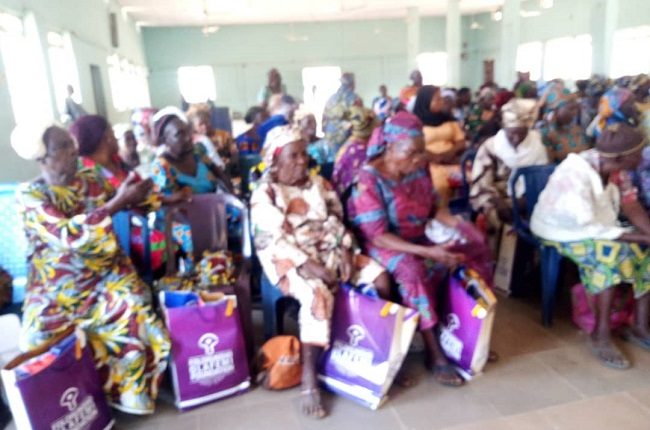 Speaking at the distribution venue in Mopa, Mr Folorunsho Olafemi, the Founder of FOF, said over 250 indigent widows had been impacted across yagba federal constituency which include: Yagba West, Yagba East and Mopamuro LGAs.

Olafemi explained that the initiative was borne out of his passion to alleviate the suffering of the vulnerable people especially widows in yagba land, and putting a smile on their faces.

The philanthropist added that the NGO in collaboration with his partner friends had recently empowered 12 youths across yagba land with business grant ranging from N100,000 to N300,000 depending on their chosen businesses.

He reiterated his commitment and that of his friends who were co-sponsors of the outreach, to continue to impact the lives of the less privilege people in the society.

”This year to the glory of God, we have been able to reach out to 250 widows in three LGAs of yagba Federal constituency in Kogi west senatorial district.

”In all, FOF has reached out to 250 indigent widows across yagba land. We gave each beneficiary a bag of semo (10kg), a pack of Maggi and Ankara clothing material, among others,” Henry said.

Henry added that the NGO had also awarded scholarships to indigent students, donated sporting tools to schools, and paid medical bills of some indigent patients worth over One million naira in 2020.

The co-sponsors, Mr Keji Giwa, Mr Oluseyi Daniels, and Mr Tayo Fida, who are Olafemi’s friends, promised their continuous support for the NGO in reaching out to the less privilege in the society.

In their separate remarks, the royal fathers in the area; the Elulu of Mopa, Oba Julius Joledo; and the Alamuro of Amuro, Oba Alfred Aiyedogbon, commended the NGO for the gesture and urged the women to continually support and pray for its founder, Olafemi.

The royal fathers jointly called on other well to do individuals in the area to emulate the same gesture by alleviating the suffering of the vulnerable people in the society.

Some of the beneficiaries, Mrs Mary Oladipo, Alice Balogun, Alice Osho, and Janet Abe, poured encomium on Olafemi and prayed to God to bless and protect him and his entire household.

Yuletide: OID distributes food items to the underprivileged in Oyo