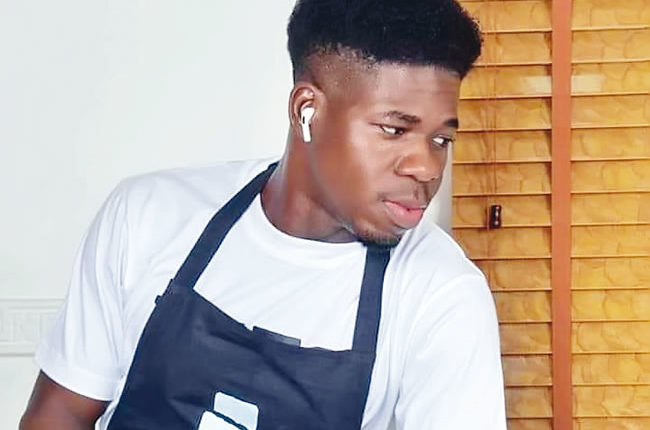 Fresh facts about how a popular Bayelsa-based baker, Temple George, was found strangled in his apartment at Old Mr. Biggs Road, Opolo in Yenagoa Bayelsa State have emerged.

According to neighbours account, the deceased, a 30-year-old indigene of Kalabari in Rivers State, was reportedly strangled to death on Friday night by two yet to be identified assailants.

Saturday Tribune learnt that the decomposing body of the late baker was later discovered by his friends, family members and landlord at about 4pm on Saturday, in his bathroom, after several calls put across to him by some of his clients failed.

A close source told our correspondent that “the deceased is a loner and doesn’t look for trouble, always busy with what he knows how to do best. You can never find him where you see people fighting or arguing because he rarely even have time for such.

“He was a very good baker who won several awards in cake baking, and was doing very well in his profession. He was trained some years back during a vocational skill acquisition programme sponsored by his church, Salvation Ministries, and since then he was progressing because of his ability to be very creative and simple.”

Narrating what she witnessed on the night before the death of the baker, a neighbour said, “that same night I saw him with two people and I didn’t suspect anything because he was with them down stairs and they were talking normal, I passed and went to my own apartment to sleep since it was night.

“It was in the evening when some people came to the compound to ask for him because they haven’t seen him in the office and that after several calls to him without success, they had come to check on him. So at that point we had to ensure the police came around before his door was forcefully opened.

“I was surprise when we saw his body in the bathroom of his apartment. What has George done to deserve this kind of gruesome murder from unknown persons.

A close family source said that this is the third attempt on his life, and that he had always fought hard to escape his attackers but this time he was unlucky.

She said: “Temple was a hardworking and industrious boy who does not give excuses for his work, he delivers early and perfectly. Oh, who did this, wicked world.”

Another neighbour said “he hasn’t stayed in this apartment for even up to a year and he liked to keep to himself always. They killed him and locked him inside the apartment. We wouldn’t have known if not for the people that came to look for him at home on that Saturday.”

When Nigerian Tribune visited the apartment, it was scattered in manner that indicates that the deceased had a struggle with his assailants before he was over powered and killed.

Meanwhile, authorities of the Bayelsa State Police Command, who confirmed the murder, disclosed that they had launched a discreet investigation into the death.

The Bayelsa State Police Command in a statement signed by its Public Relations Officer, SP Asinim Butswat, said that the Commissioner of Police, CP Mike Okoli, had ordered for discreet Investigation into the circumstances that led to the death of Temple George, a popular baker in Yenagoa, Bayelsa State.

The statement said: “preliminary Investigation reveals that the body of the deceased was discovered by his landlord on 17 April, 2021, at his apartment at Opolo, Yenagoa, Bayelsa State.

“The Scene was visited by Police detectives, and the corpse was removed to the Federal Medical Centre Mortuary for autopsy.

Why we have badly subtitled Nigerian movies —Actor, Opeyemi Dada

Agitations in Nigeria and the quest for nation-building

How Bayelsa councillor built bridge for constituents with car allowance

Analysis: Nigeria’s energy challenge is beyond one big refinery