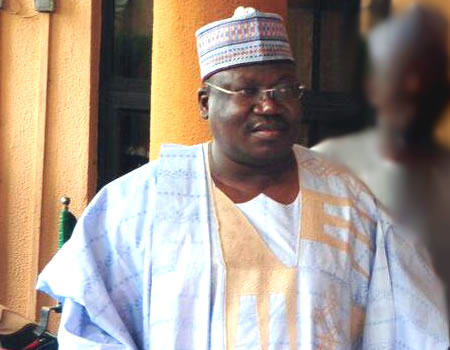 The President of the Senate, Dr Ahmad Lawan on Friday disclosed that the priority of members of the National Assembly was to work for the nation’s development irrespective of political parties.

Lawan who stated this in Akure, Ondo state capital, during a visit to the state governor, Mr Rotimi Akeredolu in Akure, assured that the present National Assembly would ensure a better and improved country.

The President of the senate was accompanied to the state by other Principal Officers of the Senate to visit the Senator representing the Southern Senatorial district of the state, Nicholas Tofowomo who was recuperating from a fatal car accident two months ago.

The Senate President said ” We will continue to give legislative support to the Federal government to improve the situations in the country.

” Our political Parties platform notwithstanding we are working for the betterment of the country. Party affiliation doesn’t matter. This 9th assembly is one united family.”

He sought for the understanding of Nigerians, appealing to them to exercise patience with the present administration, saying efforts are in top gear to ensure that the dividend of democracy gets to the doorsteps of every Nigerian.

He explained that the present administration is working round the clock to address the security economy, employment situations of the country improve in order to make lives better for Nigerians.

He appealed to state governors across the country to continue to work hand in hand with President Muhammadu Buhari to ensure the success of the administration next level programmes.

While speaking, the state governor, Akeredolu extolled the leadership of the Senate President for ensuring that the National Assembly is one united family.

The governor called for the continued support and cooperation of the National Assembly for the success of President Buhari administration.

He said “the nation is the most important no matter our political parties. We need to work with the president to take the nation to greater and enviable heights.”

COVID-19: We can’t afford resources for over 4,000 Nigerians willing to be…